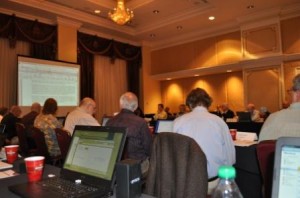 “Use of Fourth-Surface Coatings in a Cold Climate,” presented by Tim Clancy and Lisa Green of Guardian Industries, was one of the main topics of discussion today at the 2013 Insulating Glass Manufacturers Alliance Annual Conference in New Orleans.

The presentation, which was based on a study Guardian conducted, noted that the main goal of the study was the investigation of “real-world implications of the National Fenestration Rating Council (NFRC) 500 condensation resistance (CR) number as it pertains to the use of fourth-surface low-E coatings in cold environments in conjunction with a low-E on the third surface of a dual-glazed insulating glass unit (IGU).”

For the study, which took place between Fall 2011 and Fall 2012, six double-hung windows with vinyl frames were examined. The windows had a 16-mm gap with 90-percent argon, 10-percent air fill.

“The condensation front only differed for about a ½ inch to an inch with the addition of the surface four; when you get to higher humidity you see the fully condensed surface,” said Green. “The basis of this study was to determine if CR was a good method for determining condensation; we found it was a fairly good predictor.”

The IGMA conference continues through Friday. Stay tuned to www.usgnn.com™ for the latest from the event.