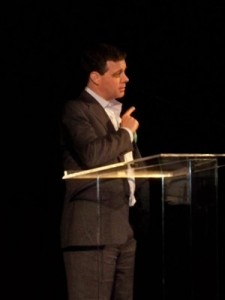 When asked in which presentations on the agenda for this years’s Building Envelope Contractors (BEC) Conference they were most interested, a number of attendees, without hesitation, replied: the discussion about new tariffs on Chinese curtainwall. David M. Spooner with the law firm of Squire Sanders represented a number of U.S.-based glazing contractors in a case involving the tariffs, and spoke yesterday about the topic. He provided some background on the case as well as insight into what contract glaziers should further know about the tariffs.

“As most of you know late last year the U.S. government decided to impose tariffs on curtainwall imports from china,” Spooner began, and continued to explain how that happened and what you can expect to happen.”

Spooner explained that the case began in 2010 when a group of U.S. extruders petitioned the Commerce Department and International Trade Committee asking them to impose anti-dumping and countervailing duties on Chinese imports. The government ultimately ruled in their favor.

At the end of the investigation the government issued a narrative description of what’s covered as part of the ruling. He explained that while these are typically fairly short, this one in fact was long and extremely confusing. In one part of the description, he explained it became somewhat confusing as to whether curtainwall was included.

So, last August three glazing contractors, Architectural Glass & Aluminum, Bagatelos Architectural Glass and Walters & Wolf AGA approached Spooner’s firm to clarify whether curtainwall units were included and therefore subject to the tariffs. Spooner said the investigation found that importers were not collecting tariffs on imports of aluminum in curtainwall units and the three companies banned together to file a scope petition. Spooner continued, saying they were opposed by two companies, Jangho and Yuanda, which said curtainwall was like a finished window and therefore should not be covered. However, on November 30 Congress ruled in favor of those filing the scope petition.

“Late December Commerce required all ports to start collecting tariffs on these [products],” said Spooner. “Ports are collecting tariffs of 171 percent on imports of curtainwall from china.” He noted the groups are working with the ports to ensure that inspectors understand and are enforcing the order. For example, some areas of which companies must careful include transshipments, mis-labeling and under-evaluation. He added, “The tariffs can change yearly and be higher or lower. The U.S. is only country that re-calculates trade remedy tariffs each year. We don’t know what will happen next year with the tariffs.” He noted, though, they will most likely change.

Spooner noted Jangho and Yuanda have challenged the Department’s ruling at the Court of International Trade. He said this will take about a year to decide. During this time, Spooner, said, Customs continues to collect tariffs during the litigation. He said he wouldn’t expect the ruling to be reversed, as usually even when the Commerce Department loses on something the Court doesn’t completely reverse its decision.

The BEC Conference concludes today. Look to usglassmag.com for more news from the event, as well as to future issues of USGlass magazine.