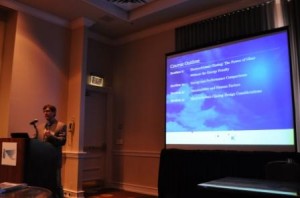 Andrew Hulse discussed the benefits and technology behind electrochromic glazing.

Attendees of today’s Glass Expo Northeast™ (GENE) 2013 were able to learn about electrochromic glass in a presentation given by Andrew Hulse, vice president of business development for SAGE Electrochromics Inc. about “Electronically Tintable Glass as an Architectural Enabler.”

People love glass, according to Hulse, but windows can have a major impact on energy consumption. “In a typical office building, 65 percent of total energy use is for lighting, heating and cooling,” he said.

“We put all of these great windows in buildings, then we cover them back up” with products such as blinds to help lower costs, Hulse added.

Thermochromic glazing, in which heat is absorbed by the material and that absorption results in tinting with intensity increasing as heat and pressure increase, is a passive system no electrically controlling capabilities, according to Hulse. Electrochromic glazing, a thin film technology that tints on demand, similar to low-E coating appears clear when off, tinted when powered, is more controllable than thermochromic. Hulse said electrochromics drive occupant comfort and energy efficiency while maintaining views and a connection to the outdoors. It is also durable, energy-efficient and aligns with current IGU installation, he says.

For cost comparison, Hulse said installation of electrochromic technology can cost nearly the same as extensive blind installation. Additionally, window tint can be controlled in zones where the window tints in sections based on the glare, light and heat as well as outdoor angle of the sun, still allowing for passable light in lower-sun zones.

Hulse also noted that electrochromics offer a solution to reduce light pollution and assist commercial buildings in areas with regulations such as “turtle laws” by allowing for nighttime tinting to reduce commercial light output and decrease the intrusion the lighting may have on residential neighbors as well as wildlife which may get confused by the lights.

GENE ’13 will run through Friday. Stay tuned to usgnn.com™ for more information and updates on the latest seminars, companies and products available at this year’s show.