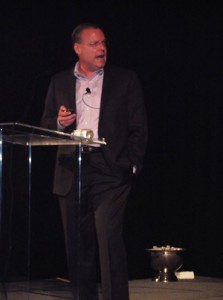 In 2007 there were 42 float plants in the U.S. Today there are 30–a fact that Scott Thomsen, president of Guardian industries’ global flat glass group, told attendees this morning during the Building Envelope Contractors (BEC) conference, underway at the Planet Hollywood Resort and Casino in Las Vegas. His presentation took a look at the state of the glass and glazing industry, more aptly titled, “The Battle for the Wall.”

Thomsen explained he wanted to focus  on the critical developments in North America that involve window- to-wall ratio (WWR) and what the industry needs to do in order to be successful.

As he told the crowd, the glass industry’s number one competitor is not another glass company, but solid-surface materials such as brick and concrete.

“A facade with a WWR of almost 100 percent is what we all dream of,” said Thomsen, noting that all over the world people are trying to reduce the WWR, claiming that’s the way to better performance.

While architects love and want to build with light, if the industry does not evolve with trends in market, all glass facades may become something of the past. As he pointed out, the industry must understand the mega-trend of energy efficiency.

“Energy codes are tightening … you need to be prepared,” he said. ” If you’re not prepared you will be left behind.”

“Our challenge as and industry is working together to keep WWR as 40 percent,” said Thomsen. He pointed out that in the U.S. there are energy codes, but some are mandatory and some are voluntary.

“In the U.S. we are not 100 percent coded in commercial facades like in other countries around the world,” he said.

He talked about how the industry must figure out how to attack the alternative facade companies that are saying less glass is good.

“Who wants to work in a brick box?” he asked. “Not many people.”

So, what happens when the WWR is reduced? There is  less glass per facade “There would be fewer windows and in other parts of the world we have seen this,” said Thomsen.

Thomsen said the industry must increase value of every step in the supply channel.

“We have to promote energy efficiency and unity through the supply channel,” he said.

As he explained, all it takes is one negative in the channel.

“It has to be a positive value at each step in the chain,” he said.

“The reality is, in many parts of the world 80 percent of IG is triple-glazing,” he said.

“Triple-glazing was a key step in Europe maintaining WWR,” said Thomsen. “We have to support these emerging technologies.”

Looking closer at Europe, Thomsen talked some about how there they are how winning the battle, holding or growing WWR. He said for one they have strong code implementation.

“In some parts of Europe you can’t sell a building unless you have a paper that says the building meets the codes,” he said. He also said many buildings in Europe are becoming certified to show that they have a zero energy payback.

Likewise, there is also a big trend in Europe toward double-skin facades.

Thomsen encouraged those in attendance to take the time to learn about the advanced technologies that are coming.

“Don’t wait for everyone else to do it first,” he said. “Get engaged with industry partners. Take the time to figure out how you can get involved … partner with suppliers who are working on zero-energy building.”

The bottom line, Thomsen said, is either improve energy efficiency or lose surface area.  “If we increase WWR we all win – that is key.”

To learn more about “The Battle for the Wall,” look to tomorrow’s BEC newscast as well as a future issue of USGlass magazine.

CLICK HERE to view a blog, “A Ready Warrior, from publisher Debra Levy on Thomsen’s presentation.