Glass is a prominent component of the New San Diego United States Courthouse, which was completed in 2012, and designed by Richard Meier & Partners. It stands 16-stories and includes six district courtrooms and an initial build-out of 12 chambers. Designs called for the tower to stand in contrast to the surrounding cityscape with a maritime terracotta and glass cladding scheme. 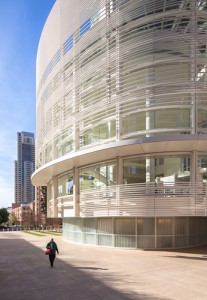 Among its glazing features, the courthouse incorporates a channel glass system that wraps around the lobby and mezzanine. Its curving form helps create an elliptical-shaped entry, which architects designed to be highly visible from all approaches to the building and to contrast with the building’s otherwise rectilinear shape. The curve is made possible by the slender frames and narrow glazed segments in the Pilkington Profilit channel glass system, which was supplied/fabricated by Technical Glass Products (TGP). The channel glass system allows for radii as low as 78 inches and the project features 1,200 square feet of Pilkington Profilit OW channel glass, standard cast.

In addition to creating a sleek arc around the lobby entrance, the cast-glass channels allow in large amounts of light. Low-iron oxide channel glass allows for up to 90 percent visible light transmission while still maintaining privacy for building occupants, according to TGP.

As the contract glazier, Enclos’ design strategy was to unitize systems throughout the project as much as possible to ease installation. Viracon supplied the insulating, laminated glass for the majority of the project. Cristacurva supplied curved, laminated and over-sized units. In addition, stringent blast requirements contributed to the unitized system’s members, anchors and connections. Bullet-resistant glazing was supplied by Oldcastle BuildingEnvelope®.