The president of J.E. Berkowitz LP credits his company’s “new age” hires for largely sparing the company from the shortage of qualified labor that is being felt nationally. 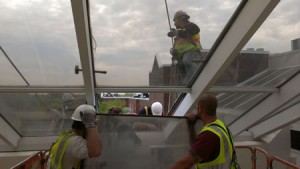 Arthur Berkowitz says his Pedricktown, N.J.-based architectural glass company’s experience with the typically older, more skilled new employees has been a positive one.

“We began to hire mostly for plant, supervisory, maintenance and some project management in early 2012 and have continued adding all through 2013, getting us back to employment levels of about 70 percent of our peak in 2008,” Berkowitz says. … “In general, the new hires have been of a better quality and have stuck versus our experiences prior to 2008.”

JEB, however, might be more the exception than the norm among glass companies and those in the construction industry. Nearly three-fourths of construction firms from around the nation report they are having trouble finding qualified craft workers to fill key spots and feel the problem is only going to worsen, according to a recent survey released by the Associated General Contractors of America (AGC).

Seventy-four percent of the more than 700 companies responding to the survey reported difficulty filling onsite construction jobs such as carpenters, equipment operators and laborers, while 53 percent are having time filling skilled professional positions such as project supervisors, estimators and engineers.

But Mike Werner, the vice president of operations for the Glen Allen, Va.-based AC Glass Company, says they’ve encountered no such problems.

“Typically, whenever we need help, we don’t have any problems finding people,” he says.

Not everybody else has been as fortunate.

“Many construction firms are already having a hard time finding qualified workers and expect construction labor shortages will only get worse,” says Stephen E. Sandherr, the AGC’s chief executive officer. “We need to take short- and long-term steps to make sure there are enough workers to meet future demand and avoid the costly construction delays that would come with labor shortages.”

“Our business is a bit different in the fact that we are on a continuous look-out for skilled service field engineers that are capable of working with their hands and have a keen understanding of electronics,” he says. “In addition, travel demands on our guys are high. Given these requirements, we, too, have a hard time finding the right people with the right skills.”

Knisely attributed the shortage of qualified labor to the overall decline of manufacturing.

“The lack of exportation of manufactured goods drives a lot of this skill shortage,” he says, “as there are simply not the people going into this line of work anymore to service the type of automated machines these factories demand.”

Knisely says there is no choice other than developing talent internally to alleviate the problem, but that, too, comes with its own set of problems.

“We typically hire people out of school with a good theoretical basis and train them in-house,” he says. “This is not very efficient and carries costs that cannot be recovered easily.”

“Kids these days in high school don’t want to sweat,” Werner says. “They want nice, air-conditioned jobs and you’re not going to find that in construction.”