One Flavor Shy of Dr. Pepper

Dr. Pepper is known for its 23 flavors. The new Palomar Medical Center (PMC) in San Diego will be known for its 22 varieties of glass offering 736,000 square feet of green innovation. Designed by Los Angeles-based CO Architects, glass is considered to be the key to the $615 million facility’s aesthetic, which allows natural light and rejects harsh elements, such as heat. 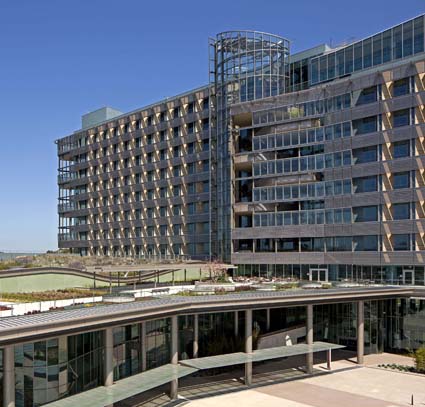 “As the capacities of glass have expanded, so have the judicious applications of glass,” says Stephen Yundt, AIA, ACHA, principal/medical planner at CO Architects. “We are able to create energy-efficient garden hospitals that are also functional and beautiful. Patients and staff enjoy sightlines and natural light, while the workings of the hospital can go forward, actually enhanced by the setting.”

According to CO Architects, a glass hospital cannot be fragile as medical facilities are needed most in times of natural disaster, such as earthquakes or heavy storms.

The architects decided to work with wind engineering consultants CPP. To test the building’s resilience, they attached a scale model of PMC with 927 sensors, placed it in a wind tunnel and examined its durability against various types of winds expected to visit northern San Diego County every several hundred years. After that test, a full-scale mock-up of a portion of the glass curtainwall was tested for seismic-, wind- and water-resistance.

A 20-foot-high airplane motor and prop was used to generate the hurricane-like forces.

PMC’s glass walls passed the tunnel and mock-up tests, requiring only minor specification changes on a few panes of glass, and no structural design changes.

“We used models and tests that tend to overestimate the destructive power of winds and earthquakes. You have to assume a very violent storm will hit the area someday. It might be decades away. Or, it might be on the first day the hospital opens,” says Alex Korter, RIBA, LEED AP, associate at CO Architects. “In any case, Palomar Medical Center always has to be ready.”

For glazing, “being ready” involved 5,000 panes of glass in 22 varieties including double-paned, low-E, tempered, laminated, etched, fritted and opaque. DPR Construction served as general contractor and construction management for the project.

PPG’s Solarban 60 and 70XL were used, in addition to tubular skylights provided by Solatube and framed skylights from Industrial Skylights.

Additionally, the hospital has already won the 2013 National Healthcare Design Award from the American Institute of Architects (AIA) Academy of Architecture for Health, in the Built category.