Tempering Topics Round Out Final Day in Charlotte

After a night of networking and bowling at StrikeCity in Charlotte, N.C., those taking part in the Glass Association of North America’s (GANA) fall conference were up early and back to work this morning. Today marks the last day of the event, which is taking place at the Omni Hotel. The tempering division, chaired by Rick Wright of Oldcastle BuilidngEnvelope®, was one of the groups that convened today, covering reports and updates from its committees and subcommittees. Ed Dean of Vesuvius USA reported that within the education committee they are making progress on the development of a tempering 101 presentation, which will become an AIA course. He said the group is working to have it completed by the end of the year. 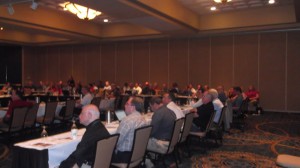 The tempering division met today as part of the GANA Fall Conference and discussed a number of documents.

Within the technical committee, chaired by Mike Rupert of PPG Industries, the group had a number of documents to discuss. These included the efforts of a task group chaired by Jeff Nixon of Glass Coatings and Concepts to update the Engineering Standards Manual. Nixon reported that they are hoping to have a ballot out by Thanksgiving. Rupert next gave a report on the

Applications for Heat-Treated Glass glass informational bulletin (GIB). He said there are still a few editorial comments to be reviewed and expects the document to be published by the end of the year.

There are also a number of other documents in the works for the division. These include a Heavy Glass Door design guide, as well as Guidelines for the Production of Heat-Treated Glass.

Chuck Wencl of Viracon reported that the Methods of Measuring Optical Distortion in Heat-Treated Flat Architectural Glass GIB has been published. He posed a question to the group regarding the development of a related standard.

“If we don’t create a standard in the industry, someone else is going to,” said Wencl. The group decided to keep the task group open for further consideration.

Also discussed during the meeting was the update to the Proper Procedures for Cleaning Architectural Flat Glass Products, which GANA is doing with the International Window Cleaning Association. The group is planning a task group meeting in the next 30-45 days, and hopes to have the document finalized by the end of the year.

Under new business, Dave Evans with Guardian Industries provided a report on efforts to update ANSI Z97.1 with new language on testing bent, tempered glass. The proposed language notes that edges will remain supported and the specimen will be tested with the convex side facing up.

The group also noted that there have been efforts within ASTM to update E1300 to include structural glass.

The group also heard two presentations. One was given by Dr. Stephen Morse of Texas Tech University, who discussed some of the various topics that are being considered as far as changes to ASTM E1300, including heat-treated glass design. Joel Feingold of Strainoptics spoke on “Measuring Surface Edge Compression to Comply with ASTM and International Standards.”

The GANA fall conference concludes today. Look to USGNN™ for more updates from the event.