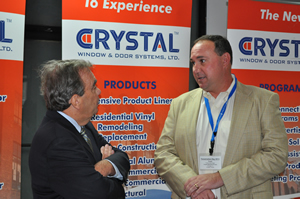 Attendees of Fenestration Day, being held today in Schaumburg, Ill., attended a tour of Crystal Window and Door’s Chicago factory yesterday. The window manufacturer opened its doors to show attendees, along with other guests including Cook County Commissioner John Daley.

Frank Ganninger, regional sales manager, showed how the company makes its vinyl and aluminum windows, the latter of which he described as their niche market. The company produces more than 400,000 units annually, 65 percent of which is commercial and 35 percent residential. The company has more than 450,000 square feet total of space in all its facilities including its plant in Queens. 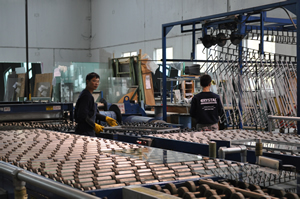 A Crystal worker on the window line.

He also was proud to point out that everything is “Made in the USA.” The company is also proud of the fact that it extrudes all of its aluminum and vinyl.

“There is very little we outsource so we control our lead times,” says Ganninger.  The company even has its own testing facility in New York.  The company builds 16 different product lines, and makes its own IG units.

“We are in 35 states and expect that to keep growing,” he says. “Texas, Louisiana and Mississippi are the most recent states we entered and we did two million in Texas this year and will double that in 2014.”

“Every penny we have is invested back into the company,” he adds. “We are coming out with an online quoting system which is a two million dollar investment.”