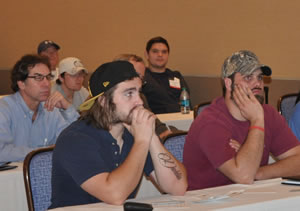 The final day of Glass Expo Midwest, held at the Renaissance Schaumburg Hotel in Schaumburg, Ill., started with morning seminars focused on a variety of subjects. Topics ranged from fire-rated glazing and social media marketing to bomb-blast mitigation and the customer of the future.

“After the school shootings there was talk to bring wired glazing back into schools because it looks safer … Our industry is cringing at that proposition,” she said. “Every year we have more than 2,000 incidents with wired glazing in schools … It just doesn’t give you the protection you need.”

Specialty tempered safety glass and glass ceramics also offer various problems, such as the inability to immediately replace, or a yet-unremovable tint.

“The solution is not for us to bring in less glass,” Ross said. “We want to have the ability to look into the classroom.”

Intumescent laminated products, such as laminated glass with an intumescence interlayer, may offer a solution, she said.

Greg Galloway, Protek brand manager for YKK, also discussed safety and how to minimize damage from bomb impact, saying, “That’s where the cost of the structure goes up … The big objective is to isolate the damage to the area of the explosion so you don’t have a progressive structural collapse,” he said, noting that laminated glass is primarily used.

As far as social media marketing, Levy said that there are various strategies, including selling services at a discount on Groupon.

“If I was an art glass company who made a bunch of items for the holidays and they weren’t selling, using Groupon to sell them may be a smart option for me,” she said.

Additionally, she told attendees that even if they didn’t have a Facebook page yet, it was important to make sure that the correct company name was reserved for them in the event the company does get on Facebook.

“Reserve the name, but don’t keep it if you can’t use it … You have to provide some information,” she said. “There are all sorts of different things you can do.”

Levy also discussed the value of using Twitter hashtags to trend topics as well as business and career networking on LinkedIn.

Keynote speaker Kenja Purkey furthered the discussion of marketing, telling attendees about “Understanding the Customer of the Future.” The discussion covered major trends the 2010 U.S Census revealed about changing consumer demographics of which businesses need to know.

“I live in a very rural area where you see many of the shops shuttered up, closed down. Hispanics are coming in and saving these towns,” Purkey said.

She also noted, “The recession has really had an effect on the housing market and minorities want what everyone else wants. The suburbs are where it’s at. People are moving outside of the city.”

Another trend she noted, “A majority of baby boomers are still in the suburbs … I believe it’s because they got upside down in their houses during the recession,” she says. “You’re also seeing more people living alone because they can afford more house I the suburbs.”