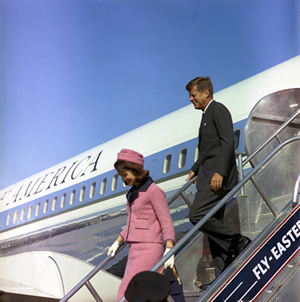 Don Haley knew something was amiss the second he walked through the back door and spied his colleagues gathered around the TV.

But never in a million years would he have guessed as to the national tragedy he and his colleagues were watching unfold that fateful November 22, 1963, afternoon with the assassination of President John F. Kennedy taking place just a few miles down the road from their offices at Oak Cliff Glass Co. in Dallas.

“What happened?” Haley queried to his stunned group of colleagues. “Did somebody spit on him?”

The reply will be indelibly ingrained in Haley’s memory.

“No, somebody shot him,” he was told.

Now 83 years old on the 50th anniversary of one of the most shocking events in American history, Haley and others within the glass industry will join many across the nation in remembering the events of that tragic day, as well as the tumultuous ones that followed to forever change America.

Haley, who went on to become one of the co-founders of Dallas-based Haley-Greer Inc., recalls being suddenly rendered speechless as the gravity of what had just happened set in. Dallas had long been an extremely conservative town and was hardly a supportive Kennedy enclave, but this was something else altogether.

On his return from lunch, Haley had passed the same Parkland Hospital where President Kennedy had just been pronounced dead. As it turns out, he was just a few minutes behind the cluster of Secret Service and local police and emergency vehicles to descend upon the area in the aftermath of the shooting.

“I was shocked,” Haley says. “Never in our lifetime had anybody been assassinated. It’s not something we had expected at all.”

Now a curtainwall manager for Technical Glass Products (TGP) and a blogger for USGlass magazine, Chuck Knickerbocker was a fifth-grader living in the metropolitan Philadelphia area on that same day. He immediately suspected something was wrong when students noticed the school janitor lowering the American flag earlier than usual.

“We didn’t know what that meant,” Knickerbocker says.

It wasn’t long, however, before the principal addressed the student body over the PA system to tell them of the death of President Kennedy just a few hours earlier. Knickerbocker’s teacher explained to them the significance of a flag lowered to half-staff.

Knickerbocker and his family were later among the thousands to later make their way to Washington, D.C., braving the cold on Sunday, November 24, to see the president’s coffin moved from the White House to the Capitol where it was to lie in State in the Capitol Rotunda.

“We were waiting for the procession to start when someone told us [Kennedy’s alleged assassin Lee Harvey] Oswald had been shot,” Knickerbocker says. “People were at least 10 deep up and down Pennsylvania Ave. When the drums started, it got deathly quiet, and for the next hour, that’s all you could hear, the muffled drums beating out their funeral cadence, and the clip-clop of the rider-less horse in the procession.  It wasn’t until the caisson carrying the President disappeared from site before anyone moved.”

Cheryl Browning, a sales manager for Ohio-based Capital Tape, was attending junior high school in East Cleveland when “the unimaginable” occurred. Who can forget, she says, the eerie quiet that suddenly blanketed her school as she and her classmates were sent home as the nation began to mourn?

“Our dashing, handsome young President had been gunned down,” Browning says.

Stunned by the dramatic events out of Dallas – first being President Kennedy’s murder, the second being Oswald’s nationally-televised murder just 48 hours later — Browning and her family did as millions of other Americans did at the time and glued themselves to the TV out of deep fear of what might happen next.

“We saw how brave [First Lady] Jackie Kennedy was to stand there in a blood-stained suit watching [Vice President Lyndon B.] Johnson take the oath of office,” Browning says. “We were stunned to see Jack Ruby shoot Lee Harvey Oswald. It was a ‘Did we really just see that?’ reaction.”

“The funeral, with all the pomp and circumstance,” she says, “but the moments that stand out were Jackie kissing the flag on the coffin, the black horse with boots turned back in the procession and, finally, that precious picture of [Kennedy’s then 3-year-old son] John-John  saluting.

“Just thinking about it brings all those memories back. Amazing how it stays with you.”

USGlass magazine publisher Deb Levy had just turned six less than a month before when an announcement came over the loudspeaker in her kindergarten class telling her that school was closing early. “While I was walking home a boy in second grade came up to our group and said the President had been shot, and I remember saying defiantly, ‘no, he hasn’t,’ because to me at that age, the President was more like a superhero than human.

“When I got home and saw my mother crying I knew it was true,” she says. “Then the whole nation became communally glued to their TV sets for the first time. It was one of the few times, like 9-11, where you knew instantly that what had just happened had shifted the way you lived not only in the present but forever more.”

Ceremonies marking the assassination’s 50th anniversary will be held at the John F. Kennedy Presidential Library and Museum in Boston and at Harvard University’s John F. Kennedy School of Government.