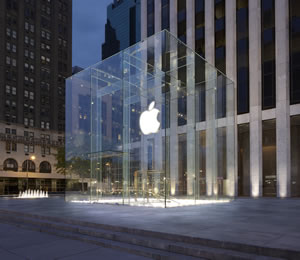 An errant storm blower caused a glass panel at the Apple Store on 5th Avenue in New York City to crack yesterday.

An errant storm blower did something to the iconic glass cube at Apple’s Fifth Avenue location in New York City that not even simulated tests for earthquakes, high winds and heavy snowfall could manage.

It impacted the glass, causing a single glass pane in the southeast corner of the cube to badly crack. But one industry expert who asked to remain anonymous warns against jumping to any quick conclusions that somehow the winter storm that has crippled the northeast with copious amounts of snow was the reason for the breakage.

“I’d hate to disappoint, but the glass was reportedly hit by a storm blower, nothing to do with freak weather occurrences,” he says. “While snow blower isn’t one of them, we take all sorts of redundancy scenarios into account when designing all-glass structures to make sure structural stability is maintained in the event of breakage. When reports like this come through, it is invariably due to accidental or deliberate impact. [Not] even earthquakes, high winds and heavy snowfall have yet to fall one of our panels.”

The Apple store remains open, as it famously always has, 24 hours a day, seven days a week.

Not everybody else in the Northeast glass industry was as fortunate. Stan Rosen, the owner of Long Island-based Rosen-Paramount Glass Co. Inc., said Wednesday morning that he was just “surprised” to have even made it into his office in the face of the 12 inches of snow that had blanketed the area. Snow accumulation in Long Island was several inches heavier than reported in nearby New York City.

“Needless to say,” Rosen says, “it’s cold and there’s a lot of snow on the ground.”

All of Rosen’s 14 employees also made the dangerous trek to work, knowing full well that the hazardous conditions outside mean they will be unable to accomplish as much as they would on a normal day.

“If we have ten deliveries, we’ll probably just get to three because you just can’t get around,” Rosen says. “You have to go real slow so as to not hit anything.

Things were looking considerably better in Boston, where roughly five inches of snow came down. The accumulation was enough to close schools for the day and snarl air traffic, but it was pretty much business as usual at Harvard Glass.

“It’s not bad at all,” says Matt Santacroce, an assistant office manager. “It’s a normal day and everybody’s busy.”