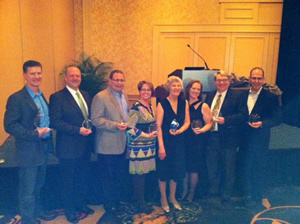 GANA members were recognized for their dedication to the industry as part of the inaugural member of the year awards.

It was tough for those who knew Greg Carney to keep a dry eye during the inaugural Glass Association of North America Awards (GANA) Reception, which included the debut of the C. Gregory Carney GANA Member of the Year Award. The event, held last night as part of the association’s Annual Conference, also included a tribute and remembrance of Greg, with several sharing stories and remembrances of him. The award, which was selected by the GANA board, was given to Arthur Berkowitz, president of J.E. Berkowitz LP. John Dwyer, president of Syracuse Glass Co., and a GANA past president, accepted on behalf of Berkowitz, who was unable to attend due to weather in the Northeast. Berkowitz has been instrumental in efforts to grow GANA’s presence, including helping to bring back and expand regional roundtable meetings.

Annual conference meetings continued today with a number of divisions meeting. The laminating division has several documents completed that are now with the board for approval.

Also of interest to the laminating division, Valerie Block provided an update on the Canadian Standards Association’s work to develop a standard for guards in and around buildings. The group currently is working on its first ballot, which is intended to go out this fall.

“It’s a major undertaking and once it’s finalized it’s expected to be adopted throughout Canada as essentially a regulation for glass in rails,” says Block, noting that in its development there has been reliance on various U.S. standards including ones from AAMA and ASTM.

“This is a broader standard than anything we’ve developed,” added Block, noting it covers everything, beginning with design through installation and maintenance.

She reminded everyone, “It covers more than just glass; it’s the whole system.”

The Annual Conference concludes tomorrow with the GANA board meeting. Look to USGNN.com™ and USGlass magazine for more reports from the event.