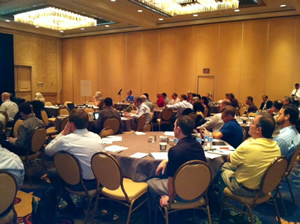 Good news for the glass industry opened the 2014 Glass Association of North America Annual Conference today in Orlando, Fla. During the Energy Division meeting code consultant Tom Culp provided a report on the recent news about the vote within ASHRAE to drop the proposal that would have reduced the window-to-wall ratio.

Energy Division chair Helen Sanders with Sage Electrochromics said a huge amount of credit is due to Culp, who pulled together a large number of supporting organizations, both in and out of glass industry, to fight the proposal.

During the meeting Culp also gave an update on codes and standards, and said 2015 will be a big year, as many jurisdictions will begin adopting new code versions. He also said in 2015 the old version of LEED will be retired midway through the year and the new version will be solely used. Hearings this year will also establish the 2014 International Green Construction Code (igCC), which will include issues such as bird-friendly glass, daylighting and renewable energy, among others.

Today’s sessions also included a number of presentations covering various energy-related topics, providing a look at ways buildings can be both energy-efficient and comfortable for people.

Erik Olsen with Transsolar began with a discussion, “High Comfort, Low Impact: International Perspectives in Climate Engineering,” explaining that comfort versus energy efficiency is a topic that is covered in all of his company’s projects.  He provided a look at various projects around the world that have been designed with this in mind. Double-skin facades, which are increasing in usage in North America, for example, were used in many of these designs.

He also stressed that these design ideas don’t have to just be used in high-end custom curtainwall projects, explaining that small-scale projects, too, can include a lot of the ideas.

Looking at differences in North America and Europe, he said one of the biggest relates to the framing U-factor. Olsen said U-factor framing is underperforming here compared to in Europe. “Glass is very similar [between North America and Europe],” he said, and explained they encourage architects to look at not an overall U-factor, but that of the frame.

Olsen encouraged attendees to be aware [of developments] and to expand their horizons. He said “aggressive solar control” is nearly impossible to accomplish with glass alone.

“Glass is only part of the solution,” he said.

The GANA Annual Conference is taking place this week at the Hilton Lake Buena Vista in Orlando. Look to USGNN.com™ all this week for more news and updates from the event.