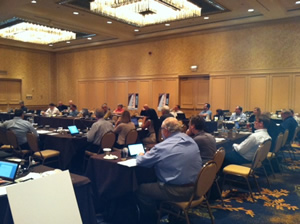 GANA’s Tempering Division focused on updates to various GIBs and other documents during the Annual Conference.

The Glass Association of North America’s (GANA) Tempering Division session rounded out the group’s Annual Meeting, which is taking place this week in Orlando, Fla. The division has a number of Glass Informational Bulletins (GIB) in development stages, and is also making updates to a number of manuals.

Beginning with the technical committee presentation, Jeff Nixon of Glass Coatings and Concepts reported that the subcommittee working on updating the Engineering Standards Manual and is nearing completion. All but two sections have been balloted and several are already approved by the board.

Mike Rupert of PPG also reported that the GIB on Applications for Heat Treated Glass is now published.

John Colapietro of Oldcastle BuildingEnvelope® gave a report about the Heavy Glass Door Design Guide. That subcommittee has been reviewing the entire manual and addressing various action items and updating graphics. The manual has also been expanded to include laminated glass so it’s no longer just a fully tempered design guide.

GANA technical director Urmilla Sowell also updated the group on the progress of a number of items. She said a task group is continuing to work on a GIB that will cover guidelines for the production of heat-treated glass. GANA is also continuing to work with the International Window Cleaners Association on jointly updating the Proper Procedures for Cleaning Architectural Glass GIB, which still has draft changes being reviewed. Sowell also reported that the Standard Test Method for Center-Punch Fragmentation of Fully Tempered Flat Glass is now being reviewed by the board.

In terms of new business and other possible activities, the group agreed to form a task group that will look into developing a GIB that would give an overall explanation of heat soaking.

Also as part of the Tempering Division meeting, Mark Abbott of LiteSentry Corp. gave a presentation that focused on optical distortion specification by architects. He covered different gauge types, such as flat bottom gauges and three-point gauges, and said it’s important to measure wavelength. “It’s called out in the ASTM test method, but is often left out,” he said.

Abbott said shorter wavelengths deliver greater optical distortion and that’s what the customer sees. “The human eye does not discriminate less than 50 millidiopters (mD),” he said, explaining that an mD spec captures capture all distortion.

GANA’s Annual Conference concludes today with its board meeting. Look to USGNN.com™ and USGlass magazine for future reports and updates.