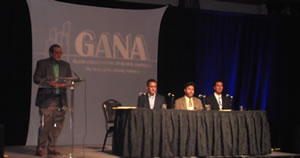 Contract glaziers taking part in this year’s Building Envelope Contractors (BEC) Conference, organized by the Glass Association of North America, had the opportunity to increase their level of knowledge and awareness about many different products and technologies. A panel discussion offered a closer look at the benefits of different glazing systems. Attendees were also given the opportunity to text in their questions, which were then presented to the panelists.

Steve Austin with 3M talked about his company’s structural glazing tapes, which are used in commercial fenestration systems. The acrylic foam tapes, he said, can act as a primary bonding component.

Some of the benefits include reduced fabrication time as there is no cure time and also the tapes offer immediate handling strength. Other benefits, Austin mentioned, include fast delivery to the job site, with same day installations possible; improved appearance/aesthetics; and proven durability and performance. Austin said they conduct independent third-party research and testing for building façade applications.

Larry Carbary of Dow Corning next discussed structural silicone glazing systems (SSG). He described this type as the flexible rubber anchor, which attaches the glass and metal to frames.

“Structural silicone is what carries the load around the perimeter of the panel,” said Carbary. “Silicone is chemically bonded to glass and no other technology does that. It also maintains its flexibility over the course of the [varying] temperatures you find on an exterior wall.”

Some of the benefits of SSG, he explained, include a continuous thermal barrier around the perimeter and the barrier; air and water infiltration performance; seismic performance; impact resistance; blast mitigation, etc. He also noted that SSG is an excellent thermal break.

Chris Giovannielli with Kawneer took a look at captured framing systems. These, he said, can offer such benefits as dual color design; flexibility in cover design with minimal impact to overall cost; and allow architects/designers creativity in the design scope. In addition, he said there are no limitations for negative wind loads and a field glazing option, as well as interior glazed options, are also available.

“The systems offer different opportunities for architects and designers,” he said. “There are many options and a great deal of flexibility.”

Audience members then had the chance to submit questions for the panelists. One of those submitted was addressed to Austin, inquiring as to whether the glazing tape installations are dependent upon finishes. Austin said that as part of standard process requirements adhesion/compatibility testing should be done.

“We can’t predict how the tape will perform on a certain finish,” he said.

Another question addressed the expected life cycle of the different products. Carbary said the honest answer is “I don’t know.” He said in June there will an ASTM symposium on the durability of adhesives and sealants. He noted that the first silicone job was in 1958 and is now being restored. He said it’s (the silicone) is still rubbery and flexible like it’s new.

Giovannielli said it’s important to make sure the pressure plates are attached to the right torque settings. “Get the covers engaged in pressure plates so have the bind between the two. We look at [these products as lasting] the lifetime of the building,” he said, adding that gaskets must be installed per the manufacturer’s specifications.

Stay tuned to USGNN.com™ for more reports from the 2014 BEC Conference.

This entry was posted in News, Today's News and tagged BEC, GANA. Bookmark the permalink.