Glass Products on Display at fensterbau/frontale 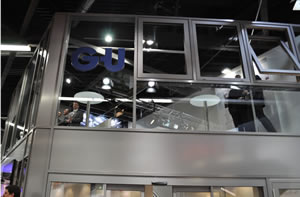 G-U Hardware configured this display to show architects the myriad of custom applications available in high-end and/or commercial applications.

Attendees to the fensterbau/frontale trade fair, held last week in Nuremburg, Germany, had some glass options to choose from, as well as hardware, machines and other products used for production of glass, windows and curtainwall. A number of companies including Bohle, C.R. Laurence and Q Railing all had glass products on display.

While U.S. attendees comprise a very small portion of visitors, several exhibitors say they were surprised at the number of U.S. representatives who traveled abroad. 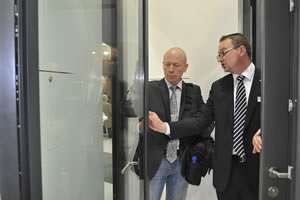 Inoutik (Deceuninck) received an award for architectural innovation and was chosen among 35 nominated companies.

“We are talking to more Americans than ever before,” said Josh Snyder, account manager, Hornschuch.

Some of these U.S. attendees were looking for new machinery options and machinery suppliers serving the U.S. are pleased that people are finally buying again.

Kevin Schrock, Elumatec, confirmed what other machinery suppliers have reported. “2013 was our best year ever and the first quarter is progressing well,” he said. “Everyone I talk to is optimistic. Markets on the West Coast, including Las Vegas and Los Angeles, are picking up.”

The company introduced the profiling machining center, SBZ 137. The 4-axis machine uses an on-board automatic tool magazine and clamps that can be adjusted with almost no tools required. All maintenance and cleaning can be performed from the front and side of the machines making space-saving installation of the machine directly against a wall possible, according to the company. Schrock said the machine will work for storefronts.

Italian machinery maker Emmegi featured the Satellite XT to the North American market for the production of curtainwall. Alberto Costa, president/CEO said the machine can be custom made 33- or 55-feet long or even up to 70 feet. “In Europe we use shorter machines,” he said.

The company is having such success that Costa is spending more time in the U.S. these days. “I am living three weeks in the U.S. and one in Europe,” he said. “The U.S. is a very important market.”

Next to machinery, hardware offerings may have well been the second star of the show. Companies such as G-U and Roto introduced a large amount of products and their booths were packed with attendees vying to get a look.

A portion of G-U Hardware’s massive booth space showcased the high-end solutions it can offer architects—many of them for commercial buildings. “For the architects that dream we are showing them what we can offer,” said Marcel van der Hoeven, technical sales representative.

These solutions include a motorized window that can open with the push of a button. “These are used more in Europe and are slowly moving to North America,” he said.

“The door locks received a lot of attention,” said van der Hoeven. “We have been busy the whole show.”

While Technoform had a variety of its solutions on display the company stressed its capabilities as a group with its signage of “people and ideas.” President Mark Silverberg said the company offers holistic solutions and is more than a company comprised of different divisions.

“Booth traffic is strong as the industry comes back and people are looking for development partners,” said Silverberg.

Inoutik (Deceuninck) received an award for architectural innovation and was chosen among 35 nominated companies. A jury composed of architects and architectural magazine representatives selected the company’s Innergy product as the ultimate winner.

“Architects don’t see the value of PVC as they focus on aluminum and wood,” he said. “We encourage architects to consider this wherever it makes sense,” he said. “With this material we are able to combine the advantages of both PVC and aluminum.” A benefit of the Innergy product is it it allows the use of a slim profile (59 mm on the frame and sash).

The Innergy product was developed in the United States then featured at fensterbau to see what European companies thought of the product. This award will no doubt allow many of them to take notice.

Aside from the products, fensterbau allowed the opportunity for attendees to talk about market trends and predictions.

Nils Schmitz, general sales manager, for Weiss Adhesives, said he is encouraged when global companies such as VEKA and Profine open offices in the U.S. “If they grow we grow with them,” he said. But this adhesives company sees itself as much more. “We are a problem solver and solution provider and we try to give extra value,” he added.

Exhibitors seemed to agree that for Europe fensterbau is “the” show for doors and windows.

“This is the show in Europe. This is it,” said Joachim Stoß, managing director, Edgetech Europe.