Despite Weather, Construction Industry Making Best of Start to 2014 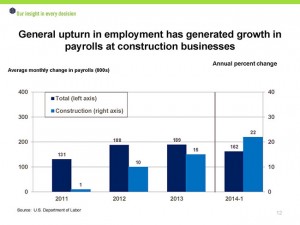 “We seem to agree on most things, but not everything …we’re economists. That’s what we do,” he says.

But during a recent economic forecast, there was at least one thing on which Markstein and several others agreed: the weather.

“In spite of the weather, we’ve had pretty healthy numbers in the first quarter,” says Kermit Baker, chief economist for the American Institute of Architects (AIA).

Markstein, Baker and Ken Simonson, chief economists from the Associated General Contractors (AGC) of America, gathered Thursday afternoon for a webinar discussing how the construction industry is trending, using an assortment of data from recent years and projections for the coming months to make their respective cases.

The construction industry began to edge upward at a slow-to-moderate rate last year after a roller-coaster span of 2008-2012. However, it hit some turbulence this year, taking on one of the coldest winters of the last two decades and a season that dropped near-record snowfall on many of the country’s major metropolitan areas.

The industry didn’t come out unscathed, but it certainly seemed to handle the setback with poise – particularly in the non-residential building market.

One solid indicator of how an industry is doing during a particular period is employment, and in that regard, construction has seen some positive signs. Baker noted that the ideal rate of added jobs at this point in the construction cycle is 20,000 to 30,000 net new positions per month, and added that the market averaged roughly 22,000 a month through the first quarter of this year.

Meanwhile, payrolls at construction businesses through the first quarter of 2014 are seven percent larger than the 2013 per-month average and have increased 22 percent since 2011.

“There’s been less volatility recently, and I think that’s critical in having a foundation for a healthy recovery,” says Baker.

While the non-residential sector appears to be slowly trending up, there are still some clear hurdles in the residential department. “Housing prices are moving in the right direction, but an upturn in mortgage rates may limit mobility in the years ahead,” says Baker.

With mortgage rates coming off historical lows in 2012 and 2013, homeowners may be less inclined to move, as going from one home to another with similar value will cost more.

Also, as Simonson noted, the pool of first-time home buyers is and will be smaller than in years past for at least some time because young adults are getting married and starting families later. Student debt is also an issue, as is skepticism stemming from the fallout of the 2008 recession.

Still, housing starts have rebounded in a substantial way since the beginning of 2012 and has only leveled off mildly in the last quarter, according to the U.S. Census Bureau. And in the big scheme of things, experts are at the very least mildly optimistic.

“There’s a fair amount of consensus among economists that economic growth is improving,” Markstein says.

1 Response to Despite Weather, Construction Industry Making Best of Start to 2014