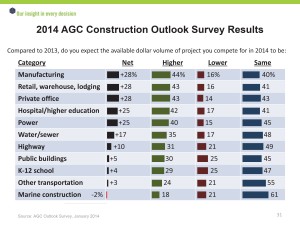 With varying degrees of optimism, leading economic experts in the construction industry have come to a general consensus that this year will be better than last.

According to one survey, many working within the industry feel the same.

At the start of each of the past five years, the Associated General Contractors of America (AGC) has surveyed its member base of more than 20,000 in order to get a comprehensive outlook on the overall market from the perspective of contractors and suppliers.

“This year for the first time, two-thirds of them said they expect the overall market to turn up either this year or next year,” says AGC chief economist Ken Simonson. “Previously, over half of them thought the recovery was over two years away.”

The construction market has been on the rebound since a very volatile four-year period following the 2008 recession.  Simonson recently joined chief economists Kermit Baker and Bernard Markstein of the American Institute of Architects and Reed Construction Data, respectively for a webinar outlining trends and data from previous years and forecasting where the construction industry is headed in the near future.

During Simonson’s presentation, he revealed the results of AGC’s Outlook Survey, which was broken down into 11 non-residential sectors of the industry. Members were asked if they expected the available dollar volume of projects they compete for in 2014 to be higher, lower or the same as in 2013.

The results in 10 of the 11 sectors provided a net positive, meaning those sectors were collectively more optimistic than neutral or pessimistic that the market would be bigger and better this year compared to last.

Manufacturing saw the highest percentage of members say they expected a higher amount of available dollar volume for projects they will compete for and shared a net positive of 28 percent with retail/warehouse/lodging (one category) and private office.

Even the public segments were at least a little more optimistic than in years past, though marine construction was the lone net negative in the survey.

“In previous years I was more optimistic,” says Simonson. “This year, I’d have to say that I don’t see it happening on the public side, but I do think we’re going to have a significant upswing in non-residential construction.”

The manufacturing sector’s forecast has proven accurate thus far. Despite a slow start, building in the manufacturing plant category saw a 140 percent surge from February to March, according to McGraw Hill Construction. Other non-residential segments, including the institutional side, also saw solid growth last month.