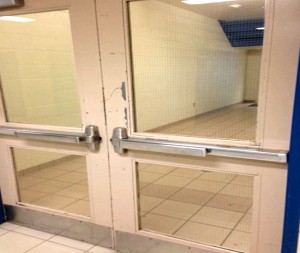 The glass door Sean Lloyd’s arm went through has since been fixed but is still made of wired glass. (Photo credit: Smitiuch Injury Law PC)

A $5 million (CAD) lawsuit was filed against the Halton Catholic District School Board in Ontario, Canada Tuesday stemming from an incident last May involving wired glass.

As detailed in a press release from the law firm handling the case, Sean Lloyd, then an 18-year-old student at Assumption Catholic Secondary School in Burlington, Ontario, was on his way to class when he tried to push open a hallway door made up mostly of wired glass. Lloyd’s arm went through the glass, which broke and severely lacerated the muscles, nerves and tendons of his right arm.

The injuries required major surgery and have left Lloyd with functional limitations and nerve damage that may be permanent, alleges the release. Represented by Michael Smitiuch of Smitiuch Injury Law PC, Lloyd is now suing the school board for negligence regarding the risks of wired glass.

“It was aware for many years, or ought to have been aware for many years, of similar previous incidents or circumstances where wired glass on school doors resulted in injury or harm to pupils and failed to take precautions or preventative measures to ensure that such injury or harm did not occur,” the allegations of the claim read in part, per official court documents.

The documents list a total of 22 allegations of negligence, including that the board “failed to apply proper glazing or post production impact films to the wired glass within the Premises.”

The Ontario School Boards’ Insurance Exchange (OSBIE), which advises Halton Catholic District and other Ontario school boards on proper safety measures, has a “Risk Management Advisories” section on its website which states that “wired glass can cause horrible injuries” and points to 100-plus claims against schools from 1987-2000 for glass injuries, many of which involve wired glass.

Last November, the Canadian General Standards Board (CGSB) announced it was working on a new edition of the national standard for wired safety glass and would release a draft to the public sometime this year. Smitiuch hopes the recent revelations in Lloyd’s case expedite that process.

“It’s definitely a wake-up call,” Smitiuch told USGNN.com™. “Yesterday we called on the federal government of Canada to immediately enact some changes to the standards, and we called on the Ontario government to make changes to its building code … We’re hoping that the attention that’s been given to Sean’s situation will speed things up.”

The CGSB told USGNN.com it established a committee made up of industry members, users and regulators to update the standard on wired glass and that it will hold its first meeting May 21. It also confirmed that the national standard for “wired safety glass” was first published in 1973 and hasn’t been updated since 1990.

Smitiuch says he expects the case to take about two years to get to trial. In the meantime, a statement of defense will be filed on behalf of the school board, and documents will be exchanged.

“The main thing, out of all of this, is that [Sean] doesn’t want this to happen to any other kids,” says Smitiuch. “Cost should never be an excuse for sacrificing the safety of students.”

The Halton Catholic District School Board did not respond to a request for comment. Stay tuned to USGNN.com for updates as they are made available.

This entry was posted in Featured News, Today's News and tagged wired glass. Bookmark the permalink.