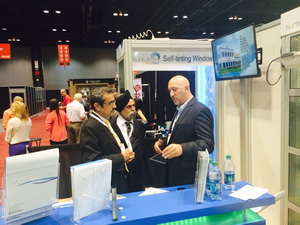 Glass isn’t considered a form of medicine—at least not yet—but its impact in the healthcare sector is certainly being felt.

The American Institute of Architect’s national convention, AIA Convention 2014, opened its gates in Chicago today at the McCormick Place, and the glass and glazing industry made its presence known throughout the floor.

A hot topic of discussion among many of the companies USGNN.com™ visited during the opening day was their products’ role in healthcare environments, something that has grown as more and more studies reveal the positive impact daylighting has on patients.

“Having that connection with the outside, nice daylighting, getting that that blue light into the building itself is what’s going to help with mood, with the way you feel, circadian rhythm and those kinds of things,” says CSI and LEED Green associate Rafael Rivero, west regional manager of CPI Daylighting.

Rivero adds that, in a way, design trends of medical buildings are actually going back to the style of a century ago. 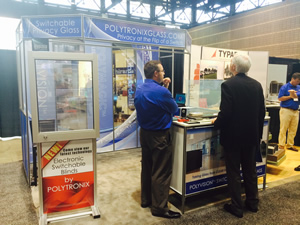 “If you look at the way buildings were designed in the early 20th century, everything was narrow, and there was lots of light,” he says. “Once we got into artificial lighting, it started getting really inexpensive you started seeing buildings get deep, no windows, things got small. Now you’re kind of going back to that [older style] with a sustainable design.”

The benefits of newer dynamic glass developments are also having a big impact on the healthcare sector—and not just from a visual perspective.

Pleotint sales and marketing coordinator Jamie Selby says Suntuitive, Pleotint’s self-tinting windows, “greatly reduce the need for blinds and shades, which are a huge concern in the healthcare industry with germs and cleaning.”

Polytronix vice president of sales and marketing Ralph Gallizzi made the same point about his company’s privacy glass. Gallizzi says the medical sector accounts for a major part of Polytronix’s clientele, noting a law that holds hospitals and doctors liable for patients picking up germs and infections they didn’t have prior to being treated.

Therefor, hospitals benefit from getting rid of as many blinds and shades as possible and can do so by implementing privacy glass.

“Wherever there’s a new hospital going up, they’re really starting to spec (privacy glass) in,” says Gallizzi. “And the reason they’re specing us in is this: If you file a lawsuit against a hospital for a germ or disease, and even if the hospital wins, the amount of money they spent on getting the attorney could’ve paid for the glass. Now, if they lose, they could’ve bought this stuff 20 to 50 times. So it’s a big deal.”

Selby adds that Pleotint discussed Suntuitive at a recent healthcare convention and that it was very well received.

It’s apparent that glazing is considered a major player in healthcare architecture of late, and that trend looks to be gaining steam.

Check back with USGNN.com over the next two days for more from the AIA convention.