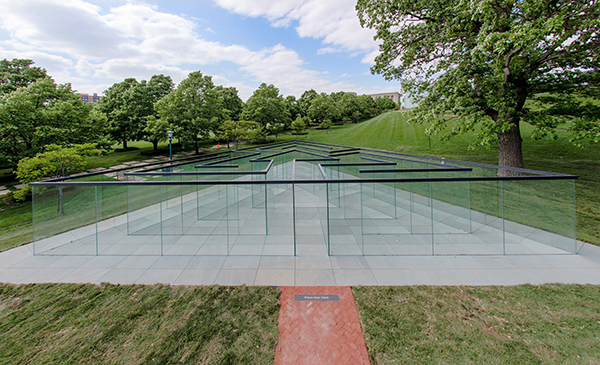 The Glass Labyrinth at the Nelson-Atkins Museum of Art in Kansas City is comprised of nearly one million pounds of 1-inch-thick plate glass. (photo credit: John Lamberton)

Creating a large piece of art takes a lot of coordination, particularly when it isn’t technically being “built” by the artist.

It takes even more coordination when the art includes 53 large glass panels and a structure weighing more than 400 tons.

But the team that completed the Glass Labyrinth project at the Nelson-Atkins Museum of Art in Kansas City had all the necessary tools—both literally and figuratively—to get the job done. And the most important part? The artist couldn’t have been happier with how it turned out, according to one team member.

“He was blown away,” says Bill Carter, president of sales at W Carter & Associates Glazing, speaking of renowned artist Robert Morris. Morris, who designed the sculpture, was present for the grand opening and ribbon-cutting ceremony for the labyrinth, which took place May 22. 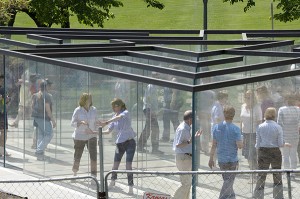 According to release from JEI Structural Engineering, nearly one million pounds of 1-inch-thick plate glass was used for the structure, which is an equilateral triangle with 62-foot sides, standing seven feet high. Inside is a maze-like walkway pattern with 43-inch-wide lanes and glass walls on both sides.

W Carter got involved with the project given its prior relationship with Nelson-Atkins. The glazing contractor has completed a number of projects for the museum over the years—most notably the glazing work on the museum’s Bloch Building addition. The addition was completed in 2006 and won a handful of architectural awards in addition to being featured in Time magazine.

Moreover, W Carter’s work two years ago on the Troost Bridge—a bridge that crosses over Brush Creek in Kansas City and is lined with 10-foot-tall glass panels—instilled some confidence in the museum given the similarities between the projects.

“That gave them a level of comfort knowing that what they were doing was achievable,” says Carter.

There were plenty of challenges, however, with arguably the biggest being the implementation of the bronze cap on top of the glass walls.

JEI engineer Stewart Jeske says another big challenge the project posed was that the artist wanted clear glass without the distortion waves tempering glass can cause. They opted to use PPG’s low-iron Starphire glass for visibility with DuPont’s SentryGlas interlayer for strength.

EnduroShield’s easy-clean protective coating was also applied to the glass to protect the surface from deterioration and save the museum on maintenance costs in the future.

Oldcastle BuildingEnvelope® provided the glass out of its Perrysburg, Ohio location, and despite the razor-thin specifications required, the fabricator-glazing contactor relationship in the project was a smooth one.

“We had no trouble with any of the glass at all,” says Carter. “It came in in beautiful shape.”

Morris, who had his own engineer by his side critiquing all the work that was being done throughout the project, had recently also designed a similar labyrinth that was installed in South America.