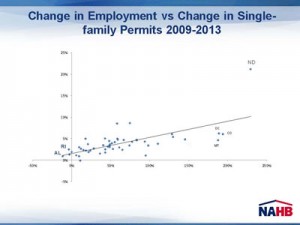 How is the housing recovery faring? Well it depends on where you live as major discrepancies still exist in different markets. Slow income growth is also prohibiting home purchases, while “part of the slow recovery has to do with slow recovery in employment,” says David Crowe, chief economist for the National Association of Homebuilders (NAHB). Crowe was one of three speakers during a mid-year economic forecast held yesterday. Additional presenters included American Institute of Architects (AIA) chief economist Kermit Baker and Association of Building Contractors (ABC) chief economist Anirban Basu.

The economists agree that affordability continues to play a major role. “Those in the lower income bracket can’t afford to buy or even rent but some conditions are getting
better particularly for existing owners,” says Baker.

“We are not seeing real income growth and that has to do with the slowdown in home purchases,” adds Crowe. “We are seeing some modest growth in the older generations but marginal growth in younger groups.”

This creates a trickle-down effect. Crowe explains that if younger people aren’t buying homes as first time homebuyers then existing 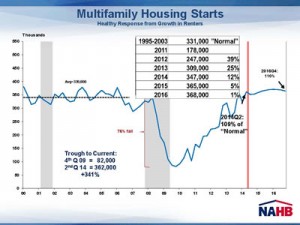 homebuyers can’t sell their house and move up to a new home. He adds that student debt also plays a role.

“These factors are making housing growth slower than what we are used to,” says Crowe. “Even though we are back up to levels of employment pre-recession, housing is still experiencing the slowest growth since the 1960s.”

While slow may be the word for housing growth there are some bright spots.

“Multi-family has been the star of the show and well above normal production levels,” says Crowe. Remodeling has also been moving at a decent pace and Crowe expects modest growth here as well.

Still there are different scenarios playing out across the country. “The Midwest still has a long way to go and is quite a distance from normal,” says Crowe. Basu says, however, that some states that really struggled in the downturn are now faring well in terms of construction jobs, including Florida, Arizona, California, Nevada and Georgia. 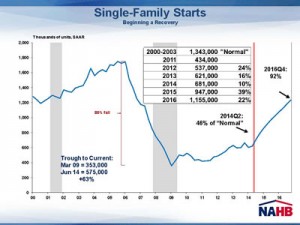 He calls these stats ‘The Comeback Kids,’ as they are posting big numbers from a growth
perspective.

In 2016, experts agree things will be closer to normal.

“On the single family side we are halfway there but gaining speed and we will begin to see some rapid incases in single-family production,” says Crowe. “So by the end of 2016 we will be closer to normal.”