Economic forecasters cite several positive indicators for the commercial market, among them is the fact that prices in commercial properties are improving as compared to house prices which unfortunately are not improving at the same rate. Additionally, the Architectural Billing Index (ABI) has been generally positive for the last 18 months, and recent ABI scores have improved significantly. That’s all according to Kermit Baker, chief economist for the American Institute of Architects (AIA). 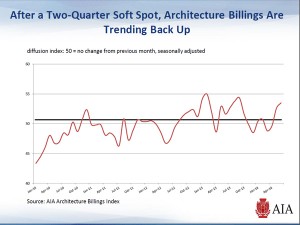 Basu also shared positive news including the fact that the economy has some momentum. “If you serve the office or lodging markets you will do well,” he said. “If you are involved heavily in institutional and educational markets the news is not as strong.”

Regarding those property values, Baker reminded the audience that “the decline was every bit as dramatic [in the commercial segment] as it was for house prices, though that wasn’t widely reported. Commercial property values are up 50 percent since they hit their bottom in 2010.” 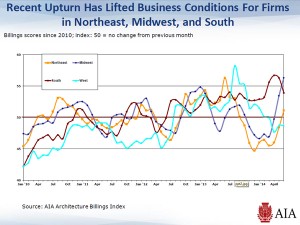 “The South has been the strongest region,” he said. “In the West firms generally have performed well but hit a flat spot this past quarter. It is currently the only region showing billings modestly declining. The Midwest was a roller coaster with ups and downs.”

Baker’s overall prediction for 2014? He forecasts mid-single digit growth on non-residential spending. “Institutional has been the weak spot with flat levels this year,” he said.

Basu’s forecast falls in line with Baker’s. “We think this year the gains will be between 5 and 6 percent but a lot of that has to happen in the last five months of the year as the first half was not fabulous,” he said. But we have been monitoring various indicators and things are starting to turn around.”

“The next several quarters will be as good as it gets for this business cycle,” he added. “There are certain aspects recovering better than others,” citing the power, office, conservation and development and lodging as the top growth markets.”