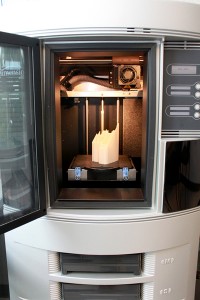 Crystal Windows’ 3-D printer, shown with a finished prototype model in place, has been successfully utilized for the past three years.

While 3D printing has been around since the 1980s, the process has been getting more common in recent years, particularly in the architectural industry. Some window companies, including Crystal Window and Door Systems, are using this technology to their advantage.

In fact, the manufacturer, based in Queens, N.Y., has been utilizing 3D printing in its product design and development efforts for the past three years. Crystal says the technology has proved so advantageous that it is planning the acquisition of additional 3D printing equipment and has expanded its use to its aluminum extrusion subsidiary, Crystal Extrusions, in Union, Mo.

“Over the past few years, Crystal has really embraced 3D printing in our product development efforts for its many advantages,” says Steve Chen, Crystal’s chief operating officer. “The technology significantly speeds the design process for our new window profiles, components and accessories, and allows us to get everything exactly right before purchasing expensive new tooling and moving into mass production.”

“Recent press articles on 3D printing often portray it as a novel new technology,” adds Chen. “But while other window manufacturers and industries may just be discovering the benefits of 3D printing, Crystal made the initial investment three years ago and has been using it extensively since then to transform our engineering and design processes. It’s been so successful, in fact, I’ve expanded its use to our Missouri aluminum extrusion subsidiary and we’re planning a next generation printer for Crystal here in Queens.”

Other industry companies, including suppliers, are seeing its advantages, as well. Mark Imbrock, vice president at Electronic Design to Market (EDTM), provider of test equipment for the window industry, has been utilizing the technology for two years. However, he has followed 3D printing as far back as 1996. When he looked at 3D printers almost 20 years ago, it was a six-figure investment.

“We looked at it and had a few parts made, and said, ‘That would be a great piece of equipment,” he says. “Then at the American Institute of Architects show in Miami a few years ago we saw a machine for $18-20,000. We said, ‘This is in a price range we can handle.’”

Imbrock put it aside again for a few years, but EDTM engineers continued to monitor its developments.

“We discovered that some smaller companies worked off the technology that runs an inkjet printer. These guys wrote all this software (using open source). Several companies grabbed this open source code and you had these 3D printers popping up for $3,000 or so.

“So these small companies starting popping up and then it became a no brainer,” Imbrock adds. The company purchased a MakerBot 3D printer and the results have been amazing, he says.

“You can draw a picture and kick it to the printer and at less than 50 cents a part you have the exact part you are looking for,” says Imbrock.

He stresses that the biggest benefit of the machine is in the prototyping of a part. “You can go right from prototype to production,” he says.

Vincent Grieco, regional sales and technical manager for Crystal, knows the advantages it offers his company’s sales and business development efforts. “Our 3D printing technology’s rapid prototyping gives us the capability to develop custom window frames, flanges, and installation accessory items such as panning and mullions,” says Grieco.  “It’s a wonderful way for architects and specifiers to visualize components before they finalize designs, and it allows us to meet the needs of building owners and contractors very quickly and cost-effectively.”

Outfitted with window hardware and subcomponents (such as screws, balances, latches, locks and weatherstripping), the 3D printed plastic models can be mated with actual vinyl and aluminum components to determine suitable fit and functionality. Any mistakes or oversights can be easily determined, the design altered and new inexpensive 3D models made. The process is repeated as necessary until everything is perfected and optimized, then the expensive actual production tooling dies are cut.

Besides reducing the product development cycle times, 3D printing saves time for manufacturing, allowing production steps to be analyzed and refined as the actual fabrication and assembly procedures are worked through, according to Crystal.