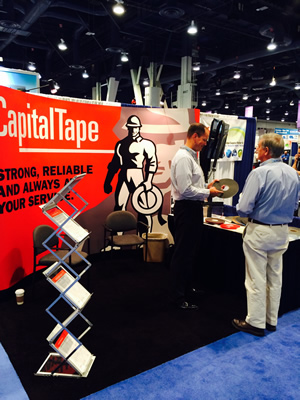 More than 330 industry suppliers are exhibiting at GlassBuild America 2014 in Las Vegas, many selling products in the same category as others in the exhibit hall. Aside from companies boasting the features of their respective products at the three-day architectural glass industry event, much of what they are selling is—to put it simply—their work habits.

With the ever-growing competition in many sectors of the glazing industry, lead times are critical.

Cleveland-based Capital Tape, exhibiting at the show, prides itself on lead times, which Mark Swanson says sets the company apart from the others.

Capital Tape sells mostly through distributors and boasts a same-day lead time for half of a given project’s order. The other half of the order, according to Swanson, is received within 48 hours. Swanson says the quick turnaround is extremely important because of the cost of labor for installation.

“Installers are being paid X amount of money per hour, and if they’re standing there on site, waiting for [a product], that does not make [the builder] happy,” he says.

Southern Stretch Forming (SSF) president David Arthur says fast lead times are one of, if not the biggest, selling point for his business.

SSF promises a 24-hour turnaround time for quotes and a 14-calendar-day standard lead time for jobs, though Arthur says the turnaround is “usually less if needed.”

Aside from lead times, testimonies and live examples of work are also critical.

Australian-based Nanovations is showing a protective and self-cleaning wipe-on glass coating, which, according to the company, is good for 10 years on an architectural application. The company’s product was selected for use on the 686-foot-tall glass-covered Socar Tower project in Azerbaijan, which Nanovations takes pride in being able to show to prospective customers.

“It’s one of the most technologically-advanced buildings in the world,” says Martin Mason. “It’s extremely important for us to show we’re a cutting-edge technology company, that we’re forward-thinking.”

Stay tuned to USGNN.com this week for continued coverage of GlassBuild America.