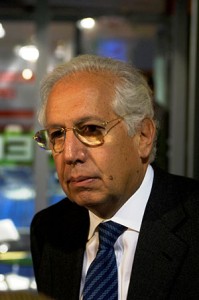 “Our Association has lost one of its founding members, but above all a great friend, who for over 30 years has dedicated his time and efforts to the growth of GIMAV and the industry as a whole,” GIMAV said in a statement. “A great person is gone.”

Fenzi’s father founded Fenzi Group in 1941, and Fenzi joined the company in 1959. Fenzi was born in Milan and earned his degree at Bocconi University.

“Present in the company since 1959, his great entrepreneurial skills, his intuition and his profound knowledge of the glass industry enabled him, together with his son Alessandro and his closest staff, to lead the company towards international success,” Fenzi said in a release. “A large part of the history of glass goes with him, leaving an inspiring example of entrepreneurial spirit and professional passion, dedication to the company and deep respect for its employees.”

Since the arrival of the Italian equipment suppliers on the international scene in the 1970s, Fenzi has served as a visible face and spokesperson for the group through his service as president of GIMAV and the every-other-year show Vitrum, which the group sponsors.

“Truthfully, we are still in shock, as I’m sure the family is and all of Fenzi Italy with this sad news today,” says Fenzi North America general manager David Devenish. “I saw Dr. Fenzi at the recent GlassBuild show in Las Vegas and am certainly pleased that I was able to spend some time with him. He was his normal, energetic self with meeting many of his customers from not only the U.S. and Canada, but other parts of the world.

“He was well respected not only within the Italian glass market, but also throughout the world for such a long time as an ambassador to the Fenzi business. Our thoughts go to Alessandro Fenzi and his family over this time.”

Read a one-on-one interview with Fenzi upon his 50-year anniversary in the industry in 2009 here, and click here to view an on-camera interview USGlass magazine did with Fenzi at glasstec 2012.

Stay tuned to USGNN.com™ for more details as they are made available.

This entry was posted in Featured News, Today's News. Bookmark the permalink.