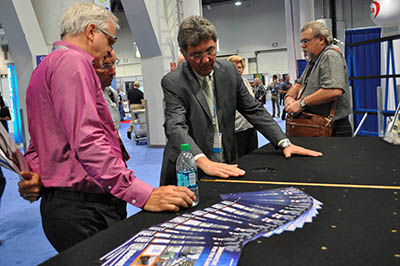 Innovation rises to the top at most trade shows – and GlassBuild is no exception. Exhibitors work to make sure everything from their booths is a literal show stopper.

So when a product has a “Patent Pending” sign on top of it, attendees take notice. That was the case with Bromer Inc.’s latest innovation, the “Thick Glass Breaker.”

The product is meant to revolutionize the way craftspeople cut thick glass.

“Before, they’d have to pull the glass to the side of the table and use a chisel and hammer,” says Serge Guillemette, sales, Bromer. “It’s dangerous but with our system, [craftspeople] are working with their hands on top of the glass.”

The Thick Glass Breaker cuts ½-inch, 5/8-inch and ¾-inch glass. It can be installed on top of a work table and is operated by a pedal on the ground. It has LED lights to align the score on the glass.

Guillemette says the machine saves time and money with its increased precision.

“When you cut a radius, you [used to have to] make it too big because of flaring,” he explains. With this product, he says that would be a thing of the past. “You can reduce the radius because you know the cut is nice. You will save time in grinding.”

Lise Mercure, vice president of Bromer, also says the product “will save money in the long run by not breaking the glass.”

Three separate companies teamed up to share a booth this year, all with the same goal – to sell window profile wrapping and products directly related to it.

Hornschuch produces the film, Jowat manufactures the adhesive used to apply the film to windows, and Fux Austria makes the machinery that puts it all together.

Hornschuch is attempting to flip the current structure of the window profile surface application market here in the U.S. Joshua Snyder, account manager at O’Sullivan Films, a subsidiary of Hornschuch, explains that about 90 percent of profiles in the states have paint on them, whereas only 10 percent use film. But that’s beginning to change, particularly down south.

“Our films are the most heat-reflective films on the market, more so than paint,” Snyder says. “Customers want to use black and brown colors in the hotter Southern climate areas but have shied away from that because the heat buildup would distort the profile,” he says.

He adds,“We’ve already met our sales goals [for 2014]. We hit them at the end of August.” Snyder says. “We believe the driving factor behind that is because companies are looking to diversify their color pallets.”

As far as the convention goes, Snyder says foot traffic has been heavy.

“This show has been busier for us than last year. We think that’s primarily because we have the entire laminate solution on display,” he says, in reference to Jowat Adhesives and Fux Austria.

Fux Austria featured their full-service window profile laminating machine along with Hornschuch’s booth, which combines the wrap and the adhesive. And the results of displaying it have proven profitable.

1 Response to Pending Patents and Partnerships in Las Vegas