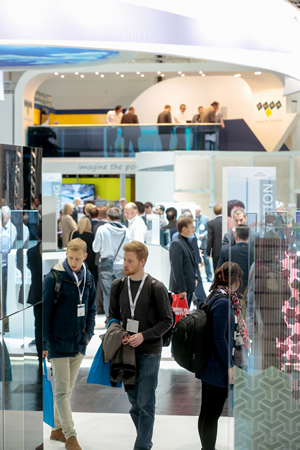 glasstec provides a look at many new and emerging technologies for the glass industry.

Positive and optimism—those are just two words to describe the impressions of many exhibitors speaking of glasstec 2014, which ended today at Messe Dusseldorf in Germany. Companies reported many sales, leads and much interest from those who attended the four-day event. New products, technologies and even innovations still in the concept phase were just some of the reasons for so much interest at this year’s event.

Speaking of their concept displays, Ariane Apler with Saint-Gobain said the company always features such products, which can provide inspiration for future designs. These include glass types designed specifically for cold climates, intermediate climates and warm climates. She explained different products are used in different climate zones, and these concept glasses are based on European values.

In addition, the company showed a number of new products that are currently available, including different colors and patterns for interior applications.

Speaking of color, Kris Vockler with ICD High Performance Coatings said in her stand they were seeing a lot of interest in their Ceramiglass product, which cures at two temperatures.

“Digital printing is also still a hot topic,” she said, commenting on the increasing presence of companies entering this market.

According to Horst Mertes with Fenetech, his company also enjoyed a strong turnout during the show.

“We’re always growing our booth and it’s been a very good show,” he said, adding they also saw many visitors from both the U.S. and Canada.

“We have been selling in our booth and we have a lot of hot leads,” he said.

According to the final glasstec show report, more than 1,200 companies exhibited at glasstec, while about 43,000 attendees from around the world took part in the event.

Be sure and look to a future issue of USGlass magazine for more news and reports from the show.