glasstec Exhibitors: Business to Business is Back in Business 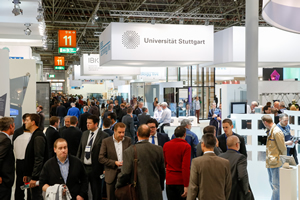 A busy hall meant busy exhibitors as more than 43,000 trade show visitors showed up at glasstec 2014, according to a Messe press release. Photo by Messe Dusseldorf.

On the final day of glasstec, exhibitors’ view of how it went was, for the most part, a consensus, particularly for U.S. business.

“It’s been marvelous for us,” said Steve Ashton, managing director of U.K.-based Ashton Industrial. “The last two shows had been a lot quieter than previous years. People were not investing, but this year is different.”

Ashton attributed the uptick in business to an improving economic situation.

“The economy is picking up at long last. People are replacing their old equipment. After five years, it’s time to change it,” he said, explaining several of his company’s glass-handling machines were en route to the U.S. as he spoke.

“There’s a lot of pent-up demand. Customers are more confident that they can move their product so they feel more comfortable doing business with us and increasing their automation,” he said.

There was also more of a U.S. presence at the show, according to Fluker. “Previously it was a struggle for us to get U.S. contacts but not this year. I think that’s a sign of the U.S. market–that companies are willing to fly their employees to the show,” he said.

Australia-based Quattrolifts’ managing director Rick Carlei said the show was a success for his company. He also explained he sees evidence of the U.S. recovery, saying, “We had our best year in the U.S. this last year.”