Through 2018, the architectural market is projected to remain the largest source of demand for flat glass, according to a forecast study by the Freedonia Group. However, the fastest growth will be seen in other markets, driven by rising manufacturing of higher-value products such as electronic displays. 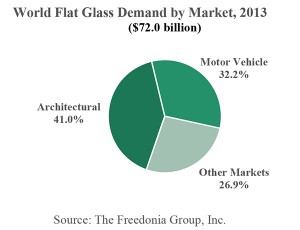 On the whole, global demand for flat glass is forecasted to advance 8.6 percent annually to 11.5 billion square meters in 2018, valued at $112 billion, according to the report.

The forecast predicts the pace of gains will accelerate relative to the 2008-2013 period, with the largest improvements expected in developed countries in Europe and North America. However, China is expected to continue to be the world’s fastest growing market for flat glass through 2018.

According to the study, North America and Europe will continue to trail the global average in flat glass demand through 2018, although recovery from the recessionary conditions seen over the 2008-13 period will lead to stronger performances going forward. 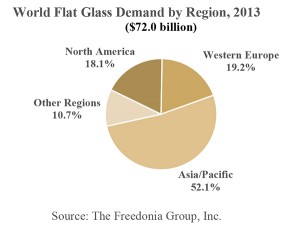 Production of flat glass will continue to be dominated by China, which currently produces roughly half of the world’s flat glass. At the end of 2013, there were 432 float lines active worldwide, 243 of which were located in China. The Asia/Pacific region holds by far the largest regional market for flat glass, accounting for 54 percent of worldwide demand in value terms in 2013.

Globally, demand for flat glass in the solar energy market is forecast to be particularly rapid as many countries increase investment in renewable energy. Solar energy applications accounted for 130 million square-meters of flat glass consumption in 2013, a figure which is expected to more than double by 2018, the study says.