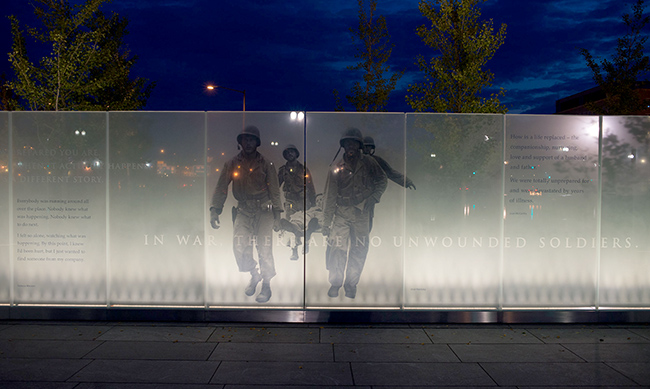 Fourteen years after being signed into law, the American Veterans Disabled for Life Memorial was dedicated in October of 2014. The completed memorial, located in Washington, D.C., stands as the first such tribute in the nation to specifically honor veterans who were injured in military conflicts throughout the United States’ history.

The memorial features three “interpretative walls” at the site, made up of 48 laminated glass panels that display soldiers’ stories through photographs and quotations. The images and text are etched within the panels, which are each made up of five 360-pound lites laminated together. Some of the etching appears on the outside surface, though most is on the interior. 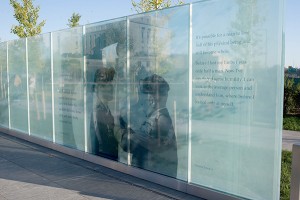 Veteran-owned, Seattle, Wash.-based Hartung Glass Industries provided the three-quarters-inch-thick PPG Starphire Glass, which was etched by Oregon-based Moon Shadow Glass via a manual sandblasting process. Moon Shadow had to produce detailed stencils and film from the original artwork prior to the sandblasting.

Tim Frasier of Moon Shadow says each lite of glass had a four-day turnaround, which included “hours of prepping, curing time, and hours of manually sandblasting to control the quality.” Then, the glass was cleaned up and sent to Oregon-based Savoy Studios, where certain text and images were paint-filled.

Oregon-based Glass Strategies later laminated the lites together using Glasslam’s Polylam. Rich Lamothe of Glass Strategies said they would do one panel a day and that “each panel was laminated on a special table made just for the project.” 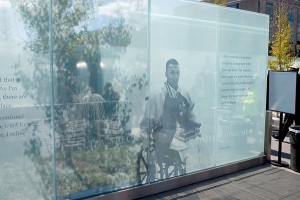 Once that process was complete, Savoy trimmed each panel to its finished size via waterjetting, and the edges were rounded and polished to 200 grit. According to Dan Legree of Savoy, the waterjetting took a day, and another two to three days were spent on the grinding and polishing edgework. The top of the walls were slightly domed for things like water runoff and bird droppings.

“A lot of thought went into it,” says Legree.

The completed, laminated panels came in at approximately 1,800 pounds apiece, and they were sent back to the Capital Region for installation, which was done by Tidewater Glazing, Inc. Michael Vergason was the memorial’s lead designer and architect, and the glass engineer was Eckersley O’Callaghan. 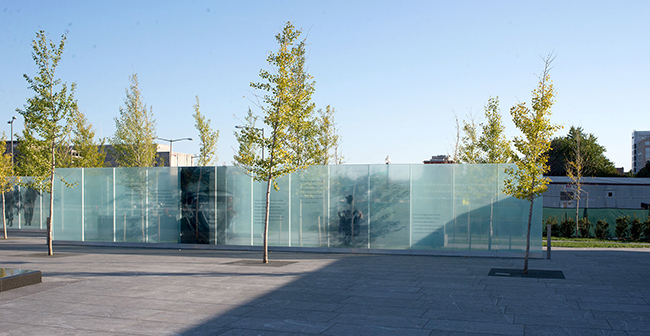 The project required a lot of precision on every level, so the fact that the glass repeatedly changed hands upon completion required a lot care to be taken and little room for error.

Lamothe says “there was definitely a lot of accountability to go around” and that each participant in the process “had a lot to live up to.”

“The standards they were asking us to abide by were beyond industry standards,” he says. “The biggest challenge was trying to get it all within those standards, and we did, so we’re very proud of that.”

Even more so, each of the mentioned parties involved in the project expressed their pride in being a part of such a historic landmark.

Kris Iverson of Moon Shadow notes that he enjoyed talking to his uncle, who is a disabled veteran, about the project, and that he provided extra meaning for his work on a personal level. 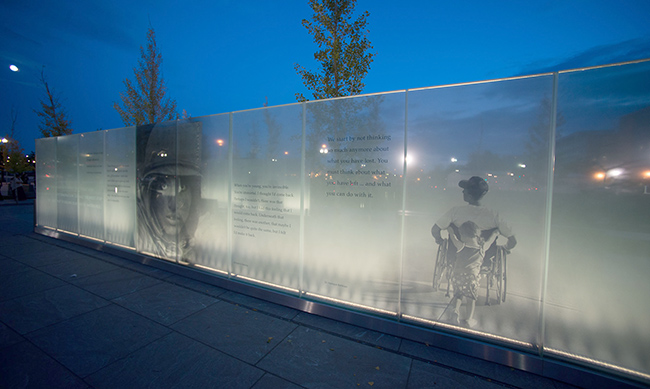 To learn more about the memorial, which sparked from the efforts of philanthropist Lois Pope, who brought the idea to the attention of Veteran Affairs back in 1997, visit http://www.avdlm.org/.