The Japanese electronics company Panasonic continues to look for ways to maximize the uses and applications of digital displays. One of its most recent prototypes related to those efforts is a display on glass windows. 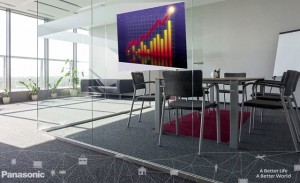 The company announced this week at CES 2015 in Las Vegas that it has developed transparent window displays, which could be used in office and retail environments.

During Panasonic’s press conference at the event, Jim Doyle, president of Panasonic Enterprise Solutions Company, gave a peek into the technology, which was also displayed on the show floor.

He showed the example of a glass wall in an office that “looks like a large, clear sheet of glass,” he says. “But [it] can instantaneously be made to display high-contrast, high-definition images and video, even in a brightly lit environment.”

The technology, according to Panasonic, could be used in an office conference room to display images on glass, conserving space. But perhaps an even bigger application of the technology could be on large storefront windows, where businesses could, for example, display information about a product with the product behind it.

“It engages consumers in an impactful way, while saving both space and energy,” says Doyle. “It opens the way to potentially using entire store windows as signage.”

Panasonic’s Dan Meehan demonstrated the technology on a short video the company compiled at CES on its digital signage.

“It has interactive video on it now,” he explains, before switching the product to transparent, “but when it’s powered off … there’s actually the product behind it for you to be able to see.”

Pansonic also gave a glimpse of its “interactive mirror,” which makes the glass both a mirror and a display. It shows transparent overlays on top of the reflective image and is essentially a high-tech cosmetic tool—or at least will be when/if it is released.

[See a full demo of the interactive mirror here.]

Samsung has also reportedly been developing their version of a transparent display, which it showed off at a past CES event, and Corning’s futuristic “A Day Made of Glass” videos of the past few years have demonstrated similar technologies.