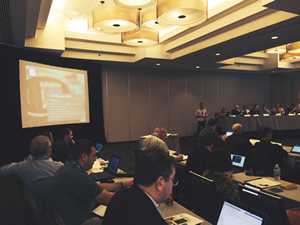 The first and maybe hottest item addressed this morning, which carried over from the end of the day Tuesday, was the IGCC’s work to establish a provisional certification that manufacturers could use for their products while the approximate seven-month certification process for ASTM E 2190 is taking place.

After delineating some details about the process, there was further discussion on whether to go forward with a pilot program or move on to a further study. A motion passed that gave the provisional certification committee the go-ahead to define specific guidelines of a pilot program. That information will be presented to the board of directors in the near future.

The topic of Gas Content Initial and After Weathering (GCIA) was also discussed in some detail Wednesday. During both the IGCC meeting and IGMA’s Emerging Technology and Innovation meeting, Miikkael Niemi from Finland-based Sparklike gave a presentation regarding his company’s new tool to measure glass concentration in an IG unit. The tool, Gasglass Laser, shoots a laser into one side of the IGU, and it measures the oxygen present by the reflection of the laser back from the opposite surface. The new product is expected to be available for commercial use in March and was developed in part as a response to the limitations of Gasglass’ last product, Gasglass Handheld, in reading glass with a low-E coating.

The IGCC agenda concluded with a determination of the next IGCC committee meeting, which is tentatively set for Wednesday, October 28-Thursday, October 29 in Tampa. IGMA’s meetings will run through Friday this week. Stay tuned to USGNN™ for more news and updates.