sedak, a subsidiary of facade specialist seele, has produced more than 800 oversized facade lites with dimensions of nearly 46 by 10½ feet for the new Apple Campus 2. Recently, Apple CEO Tim Cook visited the company to check out, in person, the final glass segment for the new Apple headquarters. 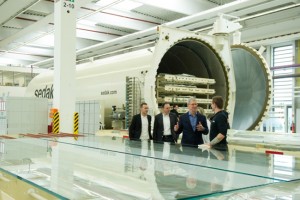 “The quality and size of the panes are beyond anything ever realized in the world,” says Cook.

seele group has been a partner of Apple’s for years, having been involved in such projects as the glass cube design of the well-known Apple Store on New York’s Fifth Avenue. “Without seele, our stores throughout the world and our Apple Campus 2 could not have been designed as we had envisaged them,” says Cook.

Nelli Diller, managing director of seele GmbH, says Apple architects and designers have clear ideas of what they want and high standards bordering on perfection. “We encourage each other and are always pushing to sound out the boundaries of the feasible, so we can try new ideas,” he says.