Along with the private sector, the federal government continues its efforts to reduce energy consumption in commercial buildings. In at least one study, the U.S. General Services Administration (GSA) has keyed in on a potential solution regarding fenestration. 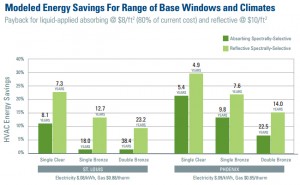 Twenty-eight percent of cooling energy demand in U.S. commercial buildings is due to heat gain through windows, according to the Lawrence Berkeley National Laboratory (LBNL). With that in mind, GSA’s Green Proving Ground (GPG) recently commissioned LBNL to assess the performance of applied solar-control retrofit films.

The assessment started out at the Goodfellow Federal Center in St. Louis, Mo., where it installed liquid-applied absorbing film on 25 double-pane bronze windows in five different zone of the building. LBNL conducted energy assessment modeling over an eight-month period at that site, though it also went on to do energy assessment modeling with both absorbing and reflective spectrally-selective films in a range of warmer climates.

What were its findings? “This is a glazing-dependent technology,” says Charlie Curcija, principal investigator at LBNL.

The study found that the reflective technology was more efficient, providing up to 29 percent in HVAC energy savings in warmer climates. However, the cost-effectiveness depended on the glass.

“They are particularly effective in buildings with single-pane clear windows in warm climates with mild winters,” the study’s findings read. “Solar-control retrofit films were not found to be cost-effective for double-pane bronze windows in most climates. Modeling results, which are useful for comparing trends across different climates and building configurations, show that spectrally-selective reflective films outperform all other solar-control strategies.”

It did add, however, that absorbing treatments may be better fit for historic buildings “where reflected solar radiation might damage exterior wood trim.”

Another negative for absorbing coatings and films, according to the study, is that room-side temperatures of double glazing with absorbing technology could have an effect on occupant comfort if the person is sitting too close to the windows.

The study concludes that climate must also be considered in application of the technology. “Limiting solar gain through windows, while it saves cooling energy during hot seasons, can increase heating consumption in winter by decreasing the amount of solar heat transferred to interior spaces,” it reads.

More data, results and conclusions on the study can be found here.