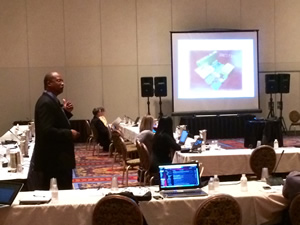 Building envelope consultant and engineer Dr. Dudley McFarquhar presents a case study of a large-scale hospital project in Dallas during the opening session of the BEC Conference Sunday.

The BEC Conference kicked off Sunday afternoon following the conclusion of the Glass Association of North America’s (GANA) Annual Conference.

Perhaps the joint networking session in the evening was the highlight of the day, though some important topics were covered during the afternoon session as well.

Chuck Knickerbocker of TGP opened the conference discussing a new bulletin, Building Information Modeling (BIM) – Manufactured Content for Glass and Glazing systems. He said GANA is hoping to have that out and published by the end of the summer.

He also said the 14-chapter Blueprint Reading and Estimating Course, which was first put together in the early 2000s, is being updated to reflect new technologies. The Project Manager’s Reference Manual is also undergoing an update.

Another document in the works is one on Building Envelope Commissioning, which has just begun development. That particular document will be based around certain ASTM standards, which are set for release soon.

Building envelope consulting and engineer Dr. Dudley McFarquhar of McFarquhar Group later did a presentation on a case study of the New Parkland Hospital in Dallas. The largest hospital in the U.S., according to McFarquhar, New Parkland used 10 acres of glass, including applications of fritted and print glass. Additionally, large skylights are used for daylighting.

The project underwent a thorough design process, utilized unique design elements and required a high level of coordination, according to McFarquhar. Glass was an important factor, as the architects designed a custom glazing pattern scheme that underwent much testing to see how its color would change in different parts of the day, in addition to functional mock-up testing and dynamic testing.

The print glass section, which has people’s actual names printed all over the lites, shows the variations of seasons, reflection of leaves, etc. “Architects dream this stuff up, and we build it,” said McFarquhar. “… The project utilizes lots of glass, and it proves that glass will perform.”

Kent said the certification for architectural glass and metal contractors was initiation to create a benchmark for the industry, improve quality process, reduce failed projects, focus on competency and training and ultimately “save cost and headache.”

The NACC board, according to Kent, is a 50-50 split of “the user community and the contract glazing community.” To learn more about the NACC, click here.

Stay tuned to USGNN.com for continued coverage at the BEC Conference throughout the week.