Glazing is Bright in the Sunshine State

To say that the construction industry in Florida took a major hit during the Great Recession would be an understatement. The state, however, has since bounced back in a big way. 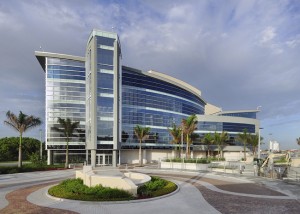 “The floodgates opened a year or so ago, particularly in South Florida,” says Randy Beard, general manager of Deerfield Beach, Fla.-based Crawford-Tracey. “Healthcare facilities, schools, universities, and commercial buildings, as well. It’s been a mix of everything.”

By all accounts, the remodel and retrofit market has been robust in Florida.

Rob Coffin’s Pompano, Fla.-based company, RAD of South Florida, does a lot of interior mall work and build-outs for new tenants, as well as exterior jobs for office buildings, storefronts in strip malls and restaurants.

“There’s a ton of retrofitting due to a lot of turnover, with tenants moving in and out all of the time,” he says. Additionally, another driver is that many malls require tenants to remodel every five or 10 years.

Carl Miller of Tab Glass & Window, located in Clearwater, Fla., adds there’s more investment in retrofitting because commercial building owners want to maintain or enhance the “leaseability” of their property. “For a glazing company in Florida, that’s the bread and butter,” he says. “Because they have to go to impact.”

Miller says that prior to early 2014, much of the construction work he saw was institutional, including government building and schools. “Now, private work has resurfaced,” he says.

Overall, there’s a lot of bidding activity going on in the state, according to Key Glass’ Gregory Burkhart, based in Bradenton, Fla. Key Glass is handling a healthy workflow, but he says that working up a backlog and maintaining it is always the challenge. “There’s a lot of competition out there,” he says.

“I always say that ‘we work ourselves out of a job every day.’ In a way, you’re happy when you sell the job, but not after you install it. You’re always eroding your backlog.”

For Key Glass, the university and healthcare sectors have been particularly strong, and the remodel segment has kept them busy, as well.

Labor has been a challenge for the Florida construction industry’s recovery, however. Due to stalled projects, a halt in planning and a lack of spending in the market, the recession cut the construction workforce in half. That effect is still being felt, as the steady uptick in work has created a shortage in craft workers. The glazing sector hasn’t been immune.

“Right now, the biggest problem we face is labor,” says Burkhart. “… The contract glass and glazing sector is unique, because vocational technical schools don’t teach you to be a glazier. So it’s a skill that’s required through on-the-job training and experience.”

Beard says Crawford-Tracey has added staff as things have picked up, including new project managers, but finding qualified field workers has been a challenge.

According to Miller, Tab Glass has reinvented itself over time with a smaller staff, which has allowed it to take a more quality-over-quantity approach to its work.

Looking forward, the glazing industry appears to have hit the ground running in Florida and should continue to push ahead for the foreseeable future.

Adds Miller, “I’m definitely optimistic. I see nothing but growth, project-wise—both with quantity and dollar amount.”