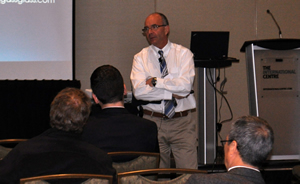 Louis Moreau of AGNORA answers a question during his presentation “Building the Big Stuff” Wednesday at Top Glass.

Go big or go home? How about go big, then go home.

Attendees of Wednesday’s Top Glass Conference and Exhibits 2015 were treated to a closing seminar by Louis Moreau of Architectural Glass of North America (AGNORA), who spoke about fabrication considerations unique to big glass.

Now in its second year, Top Glass was held at The International Centre in Mississauga, Ontario.

“I’m here to talk to you about building the big stuff,” he said. AGNORA has carved its niche in the market as a fabricator of large glass applications.

Moreau spent some time speaking about laminated glass and the challenges that go with it. “One thing you have to take into consideration when dealing with big sizes of glass is the availability of interlayer,” he said.

Moreau said the largest sheet of SentryGlas, for example, is 232-by-99 inches. AGNORA does have a technique to butt the edges together if a job demands a laminated lite larger than that, but he said it’s “very difficult and risky.” One minor issue with the process, he explained, can be costly both time-wise and from a dollar standpoint.

Tools and techniques are also a big factor in fabricating large glass, and Moreau said his company has spent a lot of resources on things such as edgework and polishing.

And with big glass, logistics are obviously a challenge, as glass suppliers will make large lites, but that doesn’t mean they’ll take care of the transportation, too. Then, when the glass is in the shop, handling equipment is critical, and space is at a premium.

“When you’re dealing with big glass, if you want to be efficient, you need space,” he said, adding that it’s important to maintain a clean, organized facility.

Moreau discussed processes such as heat strengthening and explained heat soak testing, which can determine whether a lite of glass is contaminated with nickel sulfide—a contributor to spontaneous breakage.

Moreau closed out the presentation with some examples of projects his company has completed, one being the glass stairs and walkway at the Queens Museum in New York. That project was an example of what he refered to as “the four R’s of glass design—retention, redundancy, residual capacity and resistance.”

There is a fifth R, he added, which is “regulation.”

“Of course, you’ve got to comply with the rules and codes,” he said.

Stay tuned to USGNN.com™ for continued coverage of the Top Glass conference and exhibition.