The Canadian city of Saskatoon, Saskatchewan, is located north of Montana and North Dakota and has a population of approximately a million people. This week, it’s also host to the Canadian Glass Association’s (CGA) Glass Connections conference, where industry contract glaziers, fabricators and architects have gathered for networking and knowledge. 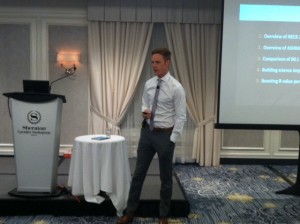 The event opened Wednesday night with a “Taste of Saskatchewan” cocktail party. Outgoing CGA president Jim Brady of Desa Glass in Calgary welcomed attendees and reported the association has seen a lot growth over the past year. In fact, he said the board has grown from six to 10 members. It also has a new addition to the technical committee. In addition, he said CGA is now part of GICC, giving the group a voice for code review.

Just as codes drive many discussions in the U.S. glazing industry, they are also important in Canada. John Hodder with Entuitive presented on cold climate glazing versus energy codes, and much of what he said was similar to some of the code considerations the glazing industry in the U.S. faces, namely window-to-wall ratios.

“Energy codes are hard to keep up with,” Hodder said, noting that there are a lot of them, and many editions are frequently revised. “They are evolving quickly.”

When looking at Canada’s national building code, he said it’s part three that pertains to the building envelope. There are three options in meeting the requirements: the prescriptive route; the tradeoff option and then performance based compliance. He says most projects opt for performance because of the leeway it provides.

Looking at the prescriptive path, this is based on overall thermal transmittance; the inverse of R-value. It is limited to the window-to-wall ratio and is stringent, he said. Ultimately, Hodder pointed out, it is based on the heating degree days your project falls within (with Canada split into eight climate zones). For example, based on heating degree days, Toronto can only have a 40 percent window-to-wall ratio. In other areas, such as Yellowknife, located in the Northwest Territory, they are limited to 20 percent.

He also discussed a theoretical study conducted that explored how glazing systems can be improved to meet code. It offered a comparative analysis of average U-values vs. frame surface temperature of various product makeups with aluminum curtainwall as the baseline. Some products they studied, such as an aluminum/fiberglass hybrid system with vacuum insulating panels (VIP) in a spandrel unit, saw improved U-factors, but he noted there could be challenges, such as size limitations. A product he discussed that is still rather new on marketplace is an all-fiberglass curtainwall. This showed a 56-percent improvement over the baseline, but the frame temperature was a consideration, falling short when it comes to condensation resistance.

Products, he said, such as the aluminum/fiberglass hybrid with the VIP and vacuum insulating glass was high in terms of the temperatures you can get and the U-values. But, he pointed out, “it won’t be a cheap curtainwall to build.” He also said this isn’t something that’s currently commercially viable on a major scale yet. Other products, such as triple-glazing, also do well. This is a known technology and can achieve both the high temperatures and good R-values.

The Glass Connections Conference will conclude today. Stay tuned to USGNN.com™ for more reports on the event.