From a building design standpoint, is the use of glazing the most important factor in learning and academic performance of elementary school students? One recent study suggests that just may be.

The University of Salford, Manchester, in the United Kingdom recently released the summary “Clever Classrooms,” a 52-page report based on a three-year study on the impact building design of elementary schools. The study covered 153 classrooms in 27 “very diverse” schools, in which the Holistic Evidence and Design (HEAD) program collected performance statistics for the students and how they correlated with building design, including size and placement of windows.

Naturalness, which glazing was considered in almost every design perimeter within the category, accounted for half of the learning impact. And of all the design parameters considered, lighting had the strongest individual effect, according to the report. 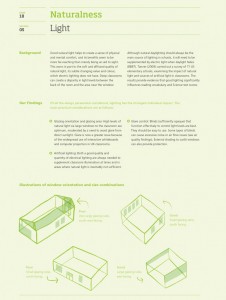 Page of study related to glazing orientation. Click to enlarge.

Regarding glazing orientation and area, “High levels of natural light via large windows to the classroom are optimum, moderated by a need to avoid glare from direct sunlight,” the report reads. It adds that glare is a greater issue lately given the widespread use of interactive whiteboards and computer projection.

Another important factor in learning, according to the study, is a connection between the students and the outside environment.

“One function of the window is maintenance of a visual link between the indoor and nature outdoors,” the report reads. “Where possible, the view through the window should be plentiful, providing a wide-field vision of landscape.”

Furthermore, the ability to open windows and create flow of ventilation ties in with air quality, and the need to control temperature brings along considerations for heat gain through glazing.

The report provides illustrations of suggested orientation of the building (see image above) and recommendations on the use of glazing. The summary of the study is broken down both for designers and educators, and glazing and windows are a key component in many of the conclusions.

Check out the full report—which goes in depth on how parameters of the study were determined in comparison to past similar studies, as well as the specific findings—HERE.