One World Trade Center in a Glass of its Own

New York City’s One World Trade Center is one of the tallest buildings in the world. And, at least according to one organization that knows a thing or two about tall buildings, it’s one of the best. 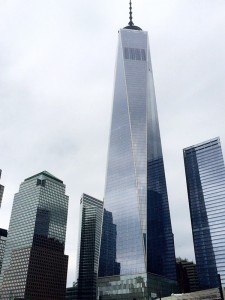 The Council on Tall Buildings and Urban Habitat named One World Trade Center, clad with Viracon glass one of its four 2015 Best Tall Building winners.

The Council on Tall Buildings and Urban Habitat (CTBUH) recently named One World Trade Center one of its four 2015 Best Tall Building winners, and the glazing on the project was clearly of critical importance in the designation. CTBUH’s description of the building in the awards announcement reads, in part, as follows:

“A luminous glass curtainwall sheaths the tower on all sides from the 20th floor to the observatory, which contributes to the tower’s crystalline elegance. Designers worked with industry experts to develop glass of unprecedented scale, capable of withstanding the wind loads of supertall construction while meeting stringent security requirements. Insulated glass units span the full floor-to-floor height of each story with no intermediate mullions – a first in skyscraper construction.”

One WTC, which stands at 1,776 feet and 104 stories (with 94 above-ground floors), features Viracon’s insulating laminated products and VRE 15-54 glass types. The IGUs required—based on form, function and aesthetics specifications—were larger than Viracon had the capability of producing at that time it was brought into the project. As a result, the company invested in new equipment to produce and handle the larger units. The varying thickness of the inner and outer lites complicated the installation process, requiring a custom-framing system from Benson Industries, the glazing contractor. 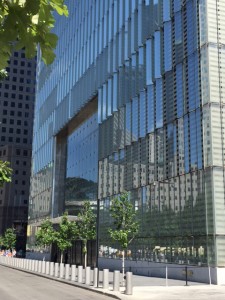 “The architects gave Viracon the latitude to produce what they envisioned because they trusted our ability to control the entire chain of engineering the glass make-up, organizing the raw material sources, processing the high-performance coating in-house, and fabricating the IGUs to the specific specification requirements,” Garret Henson, vice president of sales and marketing, tells USGNN.com™.

Henson says the company’s involvement in the project is “an honor and a significant source of employee pride.”

“The unique performance specifications for One World Trade Center required a glass solution that produced a complex combination of design aesthetics, daylighting management, energy efficiency, and maximum safety performance of the building’s façade,” he says. “To be selected to produce the glass to meet this complex set of requirements on any building, but particularly one with the landmark stature of One World Trade Center, continues to foster pride across our employee base.”

Other team members of the project, which was completed in October 2014, included Skidmore, Owings & Merril LLP architects, general contractor Tishman Construction and Permasteelisa Group. Permasteelisa’s scope of the work included 2,112 unitized panels with adjustable glass fins, perforated aluminum back panels, horizontal stainless steel slats and an integrated LED lighting system, according to the company’s website. It also completed the design, production and installation of four cable-net façades corresponding to the North, South, East and West entrances of the podium.

Meanwhile Benson had its work cut out for itself starting above the podium and all the way to the top of the building. 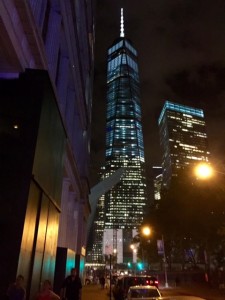 The website of Benson Industries, which installed the glazing, states that the project required “extensive quality control, impeccable communication, and progressive problem solving.”

According to a project description from Benson, a tower crane was required to lift some of the initial curtainwall corner units. “These units were assembled into mega-frames due to the complicated joinery of the converging stainless steel panels and trapezoidal glass units adjacent to them,” according to the company’s website. “Every other lite of glass around the 20th floor was left out of the curtainwall frames to provide access for installation of the podium. These were all field-glazed and employed the use of swing staging. … The anchorage was designed for blast resistance using a system of high strength anchors and reinforced glass components. A wide variety of wind loads were accommodated, requiring five different thicknesses. … A reglazing system was designed with four-sided structural silicone to ensure that each piece of glass could be replaced.”

The CTBUH has been awarding its Best Tall Building award since 2007, and this year’s selection came from a pool of 123 entries—a 40-percent increase from 2014. The other three regional winners were CapitaGreen in Singapore, Bosco Verticale in Milan, Italy, and Burj Mohammed Bin Rashid Tower in Abu Dhabi, UAE. An overall winner for the “Best Tall Building Worldwide” will be selected and announced at the awards ceremony and dinner, taking place in Mies van der Rohe’s iconic Crown Hall on November 12 at the Illinois Institute of Technology in Chicago.

In an effort to not leave anyone out, here’s the full slate of companies involved in the project, according to The Skyscraper Center database: