Glass TEXpo™ ’16 will be held in honor of Jerry Wright, longtime Texas Glass Association (TGA) president, who recently passed away on November 24, 2014. The president and owner of AAA Glass & Mirror Co. since 1962, spent decades in the industry, served as president of the TGA for multiple board terms and was president of the National Glass Association in the early 1990s. He was featured in several glass publications as an ever-present leader in our industry. 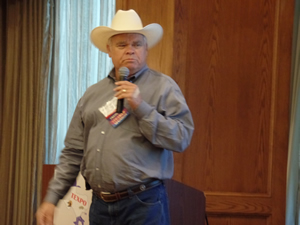 In 2002, Wright was named one of USGlass magazine’s “People to Watch.” In that article, Wright said he would like to be remembered as “a participant of life, and not a spectator. … I believe we should bloom where we are planted, and that we should leave this world in better shape than we found it to be!”

Glass TEXpo ’16 returns to San Antonio April 8-9, 2016, and is co-sponsored by the Texas Glass Association (TGA), USGlass magazine and USGNN.com™. This year’s event will be held at the Grand Hyatt San Antonio and Henry B. Gonzalez Convention Center.

Glass TEXpo will honor the Texas glass industry legend by dedicating its 2016 event to him in its opening ceremonies and culminate with a brunch on Saturday, April 9, in commemoration of Wright’s legacy.

Join us at Glass TEXpo ’16 as we honor a great thinker, leader and industry expert. For more information on Glass TEXpo ’16, please continue to check the official event website.

This entry was posted in Today's News and tagged Glass TEXpo™ ’16, TEXpo, TEXpo™ ’16. Bookmark the permalink.