Yet another lawsuit has surfaced as a result of a wired glass injury sustained at a school.

Austin Woods and his mother, Lisa, have filed a complaint in the state of Washington against the Auburn School District for damages suffered due to the district’s alleged negligence. According to court documents, on March 1, 2014, Woods was seriously injured during a high school state playoff basketball game in the Auburn High School gymnasium. 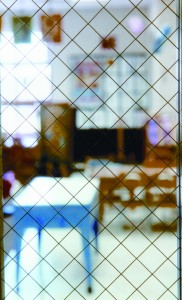 “During the game, Austin Woods chased after a pass and saved the ball,” the complaint, filed in May, reads. “Austin’s momentum propelled him directly into the wired glass doors that were placed dangerously close to the area of play. Austin’s arm went through the wired glass and suffered severe injuries including a brachial artery laceration and several significant deep lacerations on his dominant left arm.”

“In direct violation of Washington law, federal and state standards, and common safety practices, the Auburn School District installed and kept dangerous wired glass in the doors to the gymnasium where it was foreseeable that basketball players, traveling at high speed, could come into contact with the wired glass causing it to shatter and cause severe, debilitating, and potentially life altering injuries,” the complaint alleges.

It continues by alleging that “[t]he District ignored the warnings regarding wired glass and failed to take measures to make sure that the facility used to host the state basketball tournament was safe and that it did not contain dangerous conditions such as wired glass that subject visiting basketball players to an extreme and unreasonable risk of injury from wired glass well beyond any injury inherent in the sport of basketball. As a direct result of these failures, among others, Austin Woods was seriously injured when his arm went through a wired glass window in a door to the gymnasium.”

Woods asserts the district had “ample notice … regarding the danger associated with wired glass,” citing the various related codes and standards.

Safe Glass Solutions’ Greg Abel, an expert on the subject, has been retained by the law firm representing Woods. Abel says he’s frustrated that situations like this are still happening, not only because the state previously adopted the relevant building code, but because he’s met with many school officials and superintendents in the past regarding the dangers of wired glass in human impact areas and feels the warnings “continue to fall on deaf ears.”

“The highest areas subject to impact are gymnasiums and athletic facilities,” he says. “For someone only a few feet from the baseline to have made contact with [wired glass] that is still existing many, many years after the code went into effect shows they’ve done nothing proactively to make it safer.”

Damages Woods allegedly incurred include a “life threating” laceration to his dominant left arm, as well as sustained traumatic, complex lacerations to his left forearm, distal bicep and thumb with deep tendon damage and radial artery thrombosis. Other damages include “significant pain, suffering, and mental anguish, as well as permanent physical injury and scarring,” according to court documents.

Austin’s mother, meanwhile, lists damages of her own as “substantial economic loss, medical expenses, attendant care expense, constant anguish, mental suffering, injury to the parent-child relationship, and other general and special damages that will be proven at the time of trial.”

Stay tuned to USGNN.com™ for updates on the case as they’re made available.