Behind the Façade: How a New Building Resource Could Change the Game

Much of the current building stock will still be around by the middle this century, and those structures will likely represent a much larger percentage of the 2050 stock than that of new buildings going up from now until then.

With that in mind, Enclos’ Mic Patterson says that as important as it is to continue efforts to improve energy performance in new construction, “the quickest and most efficient way to improve the performance of the building sector is through energy related upgrades to the existing building stock.” 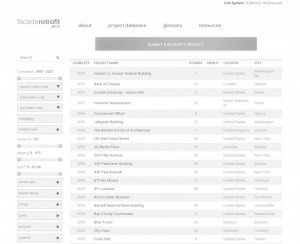 That’s where facaderetrofit.org—an ongoing project database of buildings that underwent retrofitted facades—comes in. ​Facaderetrofit.org is a collaborative research and development project between the University of Southern California (USC) School of Architecture, the Facade Tectonics Institute at USC and the Advanced Technology Studio of Enclos, a national design-assist design-build curtainwall contractor.

​As PhD candidates at the USC School of Architecture in recent years, Patterson and colleague Andrea Martinez have been doing research on the rehabilitation of the facade systems of the older existing building stock. The research, according to Patterson, included the identification and examination of prior facade renovations as case studies, and they were using a spreadsheet program to store the data. The spreadsheet, however, became increasingly difficult to utilize as the amount of data increased, so they opted for a database program.

Patterson and Martinez teamed with a web developer at Enclos for the initial development phase of a facade retrofit database that could be accessed via the internet. “It quickly became clear that this could be a resource of some potential value,” says Patterson. “My particular focus is on the early curtainwall buildings, the steel and glass towers that emerged in the mid-20th century. Many of these buildings are now 40-50 years old and still have their original facades, many of which are in need or retrofit, both as a means to elevate the energy performance of the building and modernize the appearance.

“But there are significant challenges in facade retrofit implementation, predominant among them being cost and disruption to ongoing building operations. So the result is a looming need for facade renovation to these buildings combined with a widespread lack of information about the options and best practices for so doing.”

The first phase of facaderetrofit.org was built as a demonstration project. Martinez submitted it for the 2014 Seed funding grant, an annual competition hosted by the Council for Tall Buildings and Urban Habitat and sponsored in 2014 by the East China Architectural Design & Research Institute.

“Ours was a joint proposal between USC and Enclos, with the involvement of professors Doug Noble and Karen Kensek at the School of Architecture,” says Patterson. “We were selected from among some 30 proposals to receive the $20,000 grant—not a large sum but enough to fund the next phase of development and resulting in the recent launch of the website, with the database now publicly available.”

Anyone accessing the database can enter a project that has not been previously included, or use multiple search criteria to study the hundreds of building entries.

“The database was populated during this recent development phase facilitated by two surveys that Andrea and I conducted that collected project data from a targeted audience of facade professionals,” says Patterson, who expects the resource to be used by architects, facade consultants and builders, as well as researchers and students.

Patterson says the concept of major renovation of the building facade “is a relatively new phenomenon” with few prior examples to help guide design and delivery teams.

“Upgrades to lighting, mechanical and HVAC systems are straightforward and simple when compared to the retrofit of an aging curtainwall façade,” he says. “Cost becomes a significant barrier, and one that often brings up the consideration of building demolition and reconstruction as an option. There is also most often the need to keep the building operational through the retrofit process, resulting in a host of logistical issues and complications.”

The new resource he adds, “holds the potential to provide relevant evaluation criteria when considering a facade retrofit, as well as means and methods that could be adopted for a building facade renovation of similar makeup to one or more of those included in the database. … Beyond that, the data regarding the aging of facade systems and documentation of the challenges encountered in their renovation could inform the design of facade systems for new buildings.”

Feedback on the resource so far has been positive. While the parties have just begun promoting it and a future push for more funding is ahead, Patterson says the word is spreading.

“I was at a conference in Chicago last summer where, to my surprise, some of the preliminary results of the early surveys was incorporated into a presentation on facade retrofit,” he adds. “I was in a meeting with an architectural firm in Washington, D.C., recently when the dialogue turned to facade retrofit, and one of the architects said, ‘hey, have you heard about the two students at USC that are putting together a database for facade retrofits?’

“I’m optimistic that there is going to be widespread interest and engagement with the website, and that the profession, industry, and academia will combine to contribute to its development as an unparalleled resource for the facade rehabilitation of existing buildings.”