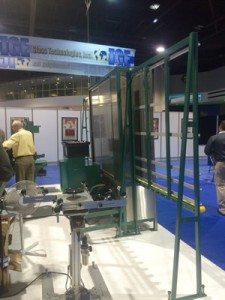 Perfect Score Technologies is known for its class cutting and processing tables but just added a vertical washer to its product line.

What’s new? Just ask the exhibitors at this year’s GlassBuild in Atlanta.

Companies across the show floor are featuring both new products and new developments of old products.

Perfect Score Technologies, based in Dallas, is introducing its new vertical glass washer.

President Richard Lambden says the company wanted to offer a solution to integrate with its other machinery, as it already sells a range of glass cutting equipment and processing tables.

The 60-inch open top washer can clean flat glass up to a half-inch without any adjustment and a minimum size of 3-by-10 inches, according to the company.

Perfect Score is also featuring a computerized glass cutting table at the show.

Plenty of other machinery is on display at GlassBuild, including Bailey Specialty Cranes and Aerials’ “Brandon” lifting machine.

Vice president of sales Rick Bigbee, based out of Muskego, Wis., says most lifts from his competitors boom out 15 feet but that the Brandon extends 21 feet, and that it is narrow enough to go through a standard 36-inch door for ease of access.

Bigbee has been in the lifting machine industry for decades but thinks the technology is in its infancy in the glass industry, as it’s being utilized more and more as glass gets bigger.

Companies at the event are using the opportunity to show off their new capabilities, and glass fabricator GGI is no exception. The company is showcasing its various printed glass products.

Marketing coordinator Marianna Villate says GGI has undergone a significant machinery upgrade at its facility and has, among other things, improved its printed glass capabilities and has allowed for higher resolution. 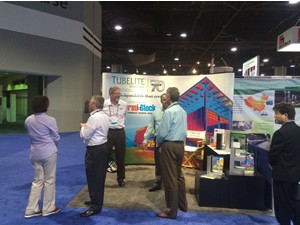 Tubelite has been busy showing its ForceFront product, which has now been evaluated for blast resistance.

Another company that is showing its continued improvement of current product offerings is Tubelite. Tubelite is featuring its Force Front curtainwall and storefront systems, which were previously hurricane-tested but have now also been re-evaluated for blast compliance.

The company’s Blast series is engineered for high-security in low- and mid-rise building projects. According to Tubelite, the framing provides improved thermal performance and can be glazed with insulated laminated glass for energy efficiency and safety. ForceFront curtainwall and Monumental Wide Stile entrance systems match Tubelite’s 34000 Series storefront’s performance and sightlines to offer a complete blast hazard mitigation system, according to the company.

Wagner, a manufacturer of railings, is showcasing the different variations of its Legato collection, as well as the new PanelGrip2 system.

The system features a lighter weight single aluminum base shoe moulding. According to the company, the lighter weight and durable locking mechanism simplifies installation while still providing code compliance and safety when properly specified and installed. It accommodates tempered laminated glass.

Attendees walking the trade show floor are often shopping for software, and there were several companies on the floor armed with the latest offerings to meet this demand.

At the Friedman booth, the company says it is making online ordering easy with its A+W iQuote. The product offers user-friendly, online ordering that reflects the inventory, pricing and production schedules in A+W’s ERP systems for windows and glass products.

AmesburyTruth is showing many new products and had an innovative display wall in the booth showcasing all of the products on display. The wall had information on each product and a QR tag so a booth visitor can scan and retrieve the URL for that product for easy reference later.

The company had many commercial products in display in its Contour line–a hardware system for casement and awning windows. Contour is composed of locks, hinges, and operators designed to complement one another both aesthetically and functionally. The Contour operator has increased load carrying capacity and 22 percent more operating leverage for ease of operation.

“Architects are designing bigger units, so we need to create products that can carry that,” says Kevin Anez, director of marketing at AmesburyTruth.

EDTM showcased a prototype of a product that can measure the U-value of the glazing in a window, coming in 2016. EDTM is partnering with a German company on the system, which tests installed windows or windows in the factory or on a jobsite. Measurement time can take about 10 to 15 minutes, and the product runs on rechargeable batteries.

Stay tuned to USGNN.com™ for continued coverage of GlassBuild, which runs through Friday.