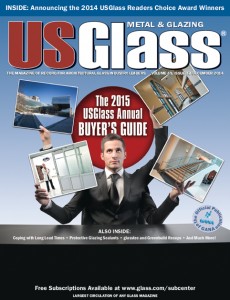 The publication was recognized with a silver award in the best “how-to” editorial category for “Five Things to Do to Ensure a Successful Fire-Rated Glazing Installation” by editor Ellen Rogers. (View the award-winning article, which appeared in the May 2014 issue on the USGlass website.)

USGlass also won a silver award for its 2015 Buyer’s Guide cover, which appeared on the front of the December 2014 issue and was designed by graphic artist Saundra Hutchison (see photo right).

“We are honored to have been recognized with two ASBPE awards this year,” says USGlass publisher Debra Levy. “Our team works incredibly hard in all areas, from video to design to feature articles, so earning these awards is testament to our team’s efforts.”