Dodge Outlook: More Construction Growth on the Way in 2016

The current construction expansion will continue through the coming year, according to projections by Dodge Data & Analytics. The company held its annual Dodge Outlook Conference in Washington, D.C., Friday, releasing its 2016 Outlook report as chief economist Robert Murray took the stage.

Murray gave a presentation on the current state of the construction economy and how things look for next year. 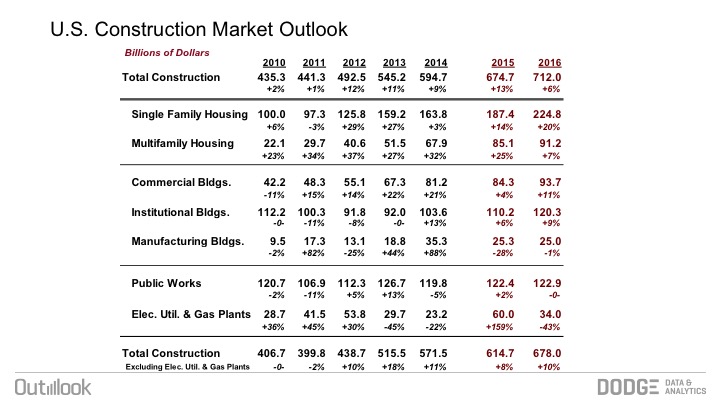 The 2015 rise, in fact, will be the strongest annual gain so far in the current expansion, according to Murray. He said much of the lift has come from nonbuilding construction, though residential building has strengthened and will be up 18 percent this year, thanks to a continued rise in multifamily construction.

Nonresidential will plateau in 2015 following its 24-percent surge in 2014, but looking forward, it will re-gain momentum in the coming year.

According to the Dodge report, nonresidential building will see gains of 9 percent, with residential increasing 16 percent.

Commercial building had seen double-digit growth in each of the past four years, so the dip in 2015 is notable. Hotel construction, however, has continued to hold up with double-digit progress for the year.

Multifamily housing, meanwhile, will increase 7 percent in dollars and 5 percent in units. Murray says low vacancies, rising rents and the demand for apartments from Millennials will encourage more development in 2016.

Single-family housing will rise 20 percent in dollars, corresponding to a 17-percent increase in units to 805,000. Murray says access to home mortgage loans is improving, and “some of the caution exercised by potential homebuyers will ease with continued employment growth.”

Institutional building will follow a 6-percent rise in 2015 with a 9-percent jump in 2016, getting a boost from an increasing amount of K-12 school construction.

Looking at the GDP, Murray notes that the U.S. economy got off to a slow start in 2015, “as U.S. exports were dampened by the sluggish global economy.” Consumer spending picked up in the second quarter, however, helping the real GDP climb to 3.9 percent. The rate of growth in the second half of the year is expected to settle back, and real GDP as a whole will be up 2.5 percent, with a stronger gain of 3.1 percent expected next year.

Stay tuned to USGNN.com™ this week for a breakdown of key sectors in the Dodge report.

1 Response to Dodge Outlook: More Construction Growth on the Way in 2016