Back to school. That’s the message in the institutional sector of the construction industry of late.

According to Robert Murray, chief economist of Dodge Data & Analytics, the education building category will lead the way next year as the institutional market picks up momentum thanks to an uptick in public funding. 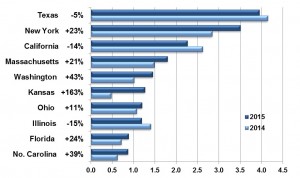 Those factors have given the institutional market a lift, as other sub-sectors, such as healthcare facilities, haven’t gained much traction. “The healthcare facilities category continues to hover around 70 million square feet and has not yet been able to see renewed expansion in a sustained manner,” Murray said.

Debate over healthcare reform has created near-term ambiguity in the sector. Other factors affecting the market include uncertainty over reduced Medicare reimbursements, Affordable Care Act implementation and more healthcare mergers. The Supreme Court decision in favor of federal subsidies in states with exchanges set up by the federal government “eases some, but not all, uncertainty,” he said.

However, Dodge remains somewhat optimistic that the healthcare category will stabilize in the coming years.

Meanwhile, the public buildings sector has experienced a lengthy decline and is expected to weaken for the eighth straight year in 2015. However, this category, which is affected by both public and private funding support, has been pushed along by the amusement and recreational sectors. Additionally, airport terminal work strengthened in 2014 and is expected to see more growth through this year.