Greenbuild 2015 is for the Birds 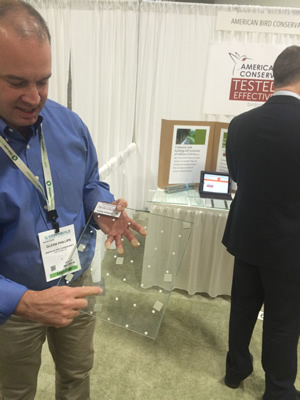 Our flying friends are getting some attention this week at Greenbuild.

The American Bird Conservancy (ABC), which is exhibiting at the show in Washington, D.C., announced Wednesday it has launched its “Bird-Smart Glass Program.” The program seeks to address the issue of bird collisions with glass, which ABC says kills hundreds of millions of birds each year in the U.S.

As a result of six years of testing, ABC has identified 18 products that are effective in significantly reducing these collisions. Products featured in the Bird-Smart Glass Program include patterned glass, window films, tapes and external screens.

Glenn Phillips of ABC says the list will continue to grow and that feedback has been positive among the glazing and building sectors. Phillips says as ABC has ramped up its efforts, he’s even spoken with dynamic glass manufacturers about ways they’re looking to implement bird-safe solutions.

Two companies included in the ABC program are Walker Glass and GlasPro, both of whom are showcasing their bird-friendly products at Greenbuild.

Walker has been a leader in the bird-safe glass community for a few years, and Walker’s Danik Dancause says the increase in developments from various companies is a good thing for the movement.

GlasPro’s Steve Sudeth was wowing attendees demonstrating the company’s ultraviolet technology, which Phillips says was the highest-rated UV product based on their testing. 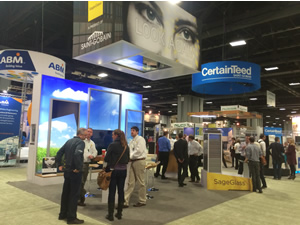 SageGlass announced a partnership with MechoSystems to add automation capabilities to its three-zone solution.

MechoSystems designs and manufactures manual, motorized and automatic shading systems. SolarTrac is part of the latter and can now be combined with Sage’s three-panel LightZone.

The automatic technology adjusts Sage’s tint levels based on “predictive sky analysis and user-defined head-load and solar-penetrating thresholds,” according to MechoSystems. The system calculates sun angles and BTU loads on the glass and can evaluate real-time sky conditions.

Elsewhere on the show floor, View is showcasing its new 10-by-6-foot electrochromic glass, which it claims is the largest on the market today.

Erich Klawuhn, vice president of product management, says the larger glass will be applicable not only to new construction but replacements, as well. For example, he said the airport terminal market can benefit, as it often utilizes large applications of glass.

Stay tuned to USGNN.com™ for continued coverage of Greenbuild.